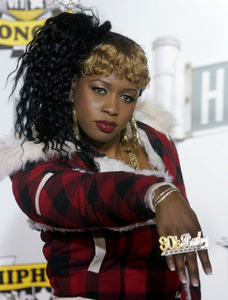 We've had plenty to say about rapper Remy Ma after she shot a woman this past July in the Meatpacking District, but things have been quiet since she appeared in court early last month. Until now!

The AP reports that the woman she is suspected of shooting, Makeda Barnes-Joseph, is suing her for $20 million -- a figure much higher than the $2,000 Remy thought Barnes-Joseph stole from her that night.

The lawsuit says the shooting left her disabled, anxious and depressed. The suit also named as defendants Universal Music Group, and individuals who play important roles in Remy Ma's career, because they should have known she "had a history of unlawful, violent and anti-social behavior."

The defendants "encouraged her to engage in a pattern of harassment, threats, intimidation, physical violence and illegal acts which were designed and calculated by these defendants to enhance, market and promote the persona of 'Remy Ma,'" according to the suit.

Well that plan backfired, Ivan Fisher (Remy's lawyer) said that "since her arrest, Remy Ma has been unable to get sufficient U.S. bookings, and a proposed recording contract has been put on hold." As for Barnes-Joseph, she remains "disabled, fearful, anxious and depressed and still unable to return to work," according to the lawsuit.