Remy Ma is Free Til November 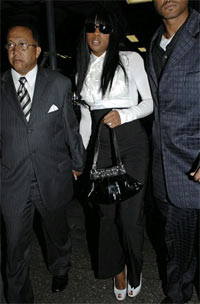 Last month Remy Ma, after a night out at Pizza Bar in the Meatpacking District, shot her friend Makeda Barnes-Joseph. Oops. The 23-year old survived the rapper's wrath, and Remy Ma went to Riker's. The altercation began after Barnes-Joseph was believed to have stolen $3,000 from Remy Ma, something that is still unconfirmed. According to the victim, instead of calling 911 after the shooting, Remy went through her purse while she bled from two shots to the stomach.

The Daily News reports that the rapper made her way to court yesterday to face charges in attempted murder, assault and weapons possession. The Manhattan Criminal Court proved to be little more than a field trip for her though, as she learned that no grand jury has heard her case yet. This means she is still free on $250,000 bail until her next court date, which is set for November 29th.

In the meantime Remy's lawyer, Ivan Fisher, is saying that "no view of the events that has surfaced publicly is accurate." His client has no problem trying to clear her own name with spontaneous declarations to reporters, a day before her court appearance she was screaming out a window in her New Jersey home: "I didn't shoot my friend! I didn't shoot nobody!" As for Barnes-Joseph, she's unable to work but currently at home recuperating.

Photograph of Remy Ma leaving the courthouse by Louis Lanzano/AP.