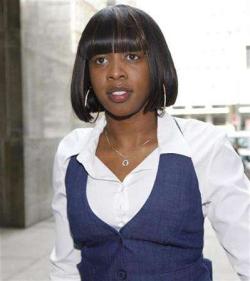 After Remy Ma was found guilty earlier this week, she was carted off in handcuffs screaming, "Oh, my God! My son! My son!" If she receives the maximum sentence of 25 years, her son will be 33 by the time she's free again -- and she will be 51.

The NY Post reports the convicted wasn't the only one causing a scene, one of her supporters was taken out of the courtroom after yelling "F*ck ya'll," and then once outside, "I don't like that judge. She should die slow."

Remy Ma's lawyer, who ended up stating in closing arguments that his client did shoot Makeda Barnes-Joseph...by accident, told the press: "She didn't anticipate this. She didn't even tell her son, who she left at home this morning."

What's a girl to do while awaiting (behind bars) her fateful sentencing on April 23rd? Start a letter writing campaign, of course. The Daily News is reporting that she is begging fans to put pen to paper in hopes of getting a shorter sentence. Her MySpace page contains the following message:

"Please write letters about how Remy and her music has positively affected you, influenced you, inspired you, etc. In hopes that the judge will be lenient in Remy's upcoming sentencing. Thank you all for your support."

Have something to say to the rapper? Email her at lettersforremy@gmail.com.

Remy Ma arriving at court in March, via Reuters.

#crime
#fan mail
#letters
#Makeda Barnes-Joseph
#myspace
#remy ma
#sentencing
#shooting
Do you know the scoop? Comment below or Send us a Tip