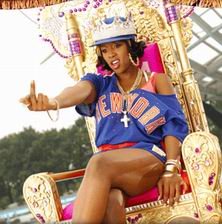 Last year Grammy-nominated Bronx rapper Remy Ma got herself into some trouble when she allegedly shot a woman (Makeda Barnes-Joseph) who she thought stole $3,000 from her. This all occurred after the two, along with a large party, were enjoying a night at Pizza Bar in the Meatpacking District.

Since then she's been in and out of Rikers, and has been slapped with a $20 million lawsuit by Barnes-Joseph...but her problems just got bigger. Earlier this week her attorney Ivan Fisher admitted in closing arguments that his client did shoot "her friend"...but it was an accident! The gun simply went off while the two women struggled for Barnes-Joseph's purse. An admission that goes against everything Remy Ma has stated since the incident occurred last summer.

The Daily News reports that the jury has now spoken, and Remy Ma has been found guilty. She now faces up to 25 years in prison for first-degree assault and weapons charges. She was led out of the courtroom in handcuffs screaming, "Oh my god!" She is currently being held without bail until her April 23rd sentencing.