Removing Trash Cans From The Subways Has Resulted In Less Trash In The Subways, MTA Says

A pilot program designed to reduce trash in subway stations by removing trash cans is working, for reasons seemingly counterintuitive to rational thinkers. But is it really working the way the MTA suggests it is?

The pilot started back in 2011, with the removal of trash cans in just two stations. Once it determined that neither had been subsumed by garbage, the MTA went on to remove cans from 10 stations more around the city, which resulted, incredibly, in 66 percent less trash. Last July, they added 29 more stations along the J/M/Z lines, prompting an additional 36 percent drop in the amount of garbage hauled out.

“This pilot appears counterintuitive but when we placed notices at the pilot stations indicating that the cans had been removed and asked the customers for their cooperation, it looks like they listened,” New York City Transit President Carmen Bianco said in a statement. “Given these results, we’ll continue the pilot and monitor and collect additional data at stations.”

The idea, apparently, is that straphangers will be more inclined to throw their waste out before entering the subway, because straphangers are notoriously empathetic, thoughtful people. But here's the thing: Litter at the pilot stations—meaning, the crap thrown on the ground—has remained on par with the others, implying that those who would normally throw their waste into trash cans are now simply holding on to it, and that those who would normally throw their trash on the ground like petulant children are carrying on with business as usual.

"The reduction in trash in these stations reduced the number of bags to be stored and, consequently, improved the customer experience by reducing the potential bags visible to customers as well as the potential food available to rodents,” Senior Vice President of Subways Joseph Leader said in a statement. “Additionally, the significant reduction in trash reduced the need for trash pickups in the pilot stations, which freed up personnel for deployment to other stations.”

So straphangers' reward for being forced to hold on to their gum wrappers and dirty tissues is that we no longer have to look at trash bags, and that the MTA is forced to do fewer trash pickups. This is not to say the trash is simply vanishing—it's still being hauled away by the city's Department of Sanitation from trash cans located elsewhere. It's just not the MTA's problem anymore.

If anything, this has made clear that there are three types of people in this world: The type that will hold on to their trash until they find a can, no matter what, the type that will throw their garbage on the ground, no matter what, and some unknown number of swing litterers, who will throw their garbage away if it's convenient, but on the ground if it's not. 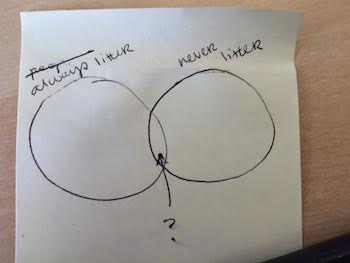 I asked MTA spokesperson Adam Lisberg why the MTA whether there was any underlying rationale behind this pilot's success that he could think of.

"I know trash cans have been removed from the London Underground and the PATH system for security reasons, which gave us enough grounding to try it here," he said. "I would like to think that the vast majority of our subway customers are responsible and upstanding, and would rather carry a dirty tissue or completed crossword puzzle with them than contribute to litter."

#garbage
#litter
#MTA
#psychology
#subways
#trash
Do you know the scoop? Comment below or Send us a Tip