Reminder To Tourists: Don't Bring Your Gun To The 9/11 Memorial

Another day, another story about an idiot gun owner from out of town who is shocked that New York City has strict gun possession laws.

The NY Post reports that this time, a Texas resident—and Marine Corps veteran—was busted: "Elizabeth Anne Enderli, 31, had no idea her Texas concealed-carry permit was null in New York when she asked Ground Zero security on Saturday where she could store her 9mm and .380 caliber pistols."

“This whole thing is, pardon my language, bulls-t,” friend Aimey Richardson told The Post at Manhattan Criminal Court. The two had traveled from their homes in the Houston area to New York for Richardson’s birthday.

Enderli didn’t think twice when she popped the two pistols into her backpack before heading to the city Saturday — and followed procedures by keeping the guns in a lockbox on their flight to Philadelphia. From there, they rented a car and drove to New York.

Enderli is never without her trusty firearms, Richardson explained.

“Our husbands don’t give us a hug and a kiss, they pat us down to make sure we’re armed,” she said. “We’re not allowed to go out without them.”

Richardson added that Enderli would have worn the guns but "was afraid ... it would freak [New Yorkers] out."

Well, if Enderli spent 30 seconds looking up state-by-state gun laws like any responsible gun owner, she would have found out that you need a permit to carry a gun in NYC (PDF). New York State permits aren't even necessarily valid in NYC. And here's a list of rules at the memorial: 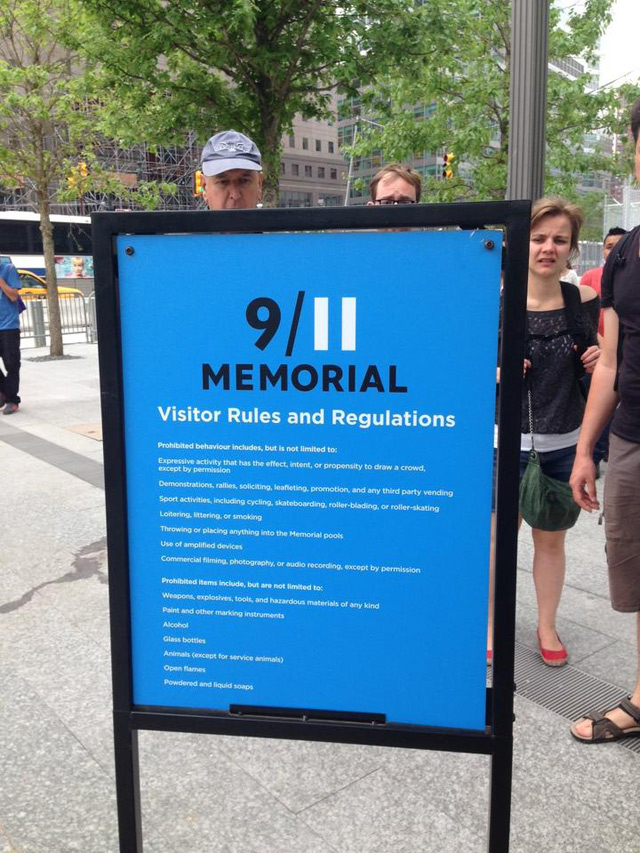 Enderli is at least the third woman to be arrested for bringing her gun to the 9/11 Memorial, following the footsteps of a Wisconsin woman and a Tennessee woman. There's also the North Carolina resident who decided to leave his gun in the chair of a hotel lobby because he didn't want to bring it into the 9/11 Memorial.