It’s an unremarkable day in New York, and that means there are at least three new stories detailing unscrupulousness, graft, and blatantly shady deals involving our putative public servants.

In his State of the State address in January, Governor Cuomo announced a series of modest ethics reforms that we’ve been discussing since his dad was in office: limiting legislators’ outside income, adopting a publicly funded campaign finance system, and closing a loophole that allows LLCs to donate huge sums of money to candidates (Cuomo himself has reaped millions through this practice).

The governor disbanded his own ethics commission in 2014 because they had accomplished their mission, but somehow they missed a spot and the very next year the heads of both legislative bodies were tried and convicted on charges related to corruption.

“These ethics reforms are important,” Governor Cuomo told us in January. “Especially considering the context of the past year.”

So important, the Wall Street Journal reports, that Cuomo “has done little to advance these proposals or any other ethics measures.”

Government watchdog groups have criticized the fact that the state budget is being hammered out in secret, yet again, and pleaded with the governor and legislative leaders [PDF] to hold public hearings to discuss ethics reform.

Cuomo’s response can best be summed up as: “Make us.”

“This year, it is the voters who will provide the best leverage,” said John P.L. Kelly, a spokesman for Mr. Cuomo. “As the governor has previously said, we cannot imagine a scenario where legislators will be able ‎to face their constituents without taking significant action on ethics reform.”

Here in the city, DNAinfo reports that State Attorney General Eric Schneiderman and the Department of Investigation are looking at a “longtime friend and campaign donor” of Mayor de Blasio’s for taking loans and skimming taxpayer money meant for homeless residents.

Yitzchock “Isaac” Leshinsky was the CEO of Housing Bridge until February of last year, when he resigned amid an audit of his company’s finances.

Housing Bridge received $260 million in city contracts over the last decade, more than $60 million of which came after de Blasio came into office; DNAinfo reports that Housing Bridge gave Leshinsky and the companies he and his wife ran more than $5 million in loans and fees from 2010 to 2015. The couple has also donated $19,475 to de Blasio since 2007.

Leshinsky has denied any wrongdoing, and a spokesperson for the Department of Homeless Services says that the City is untangling itself from Housing Partners: “Every effort will be made to recover any and all taxpayer dollars per the city’s agreement with Housing Partners, while being careful not to interfere with ongoing investigations.” 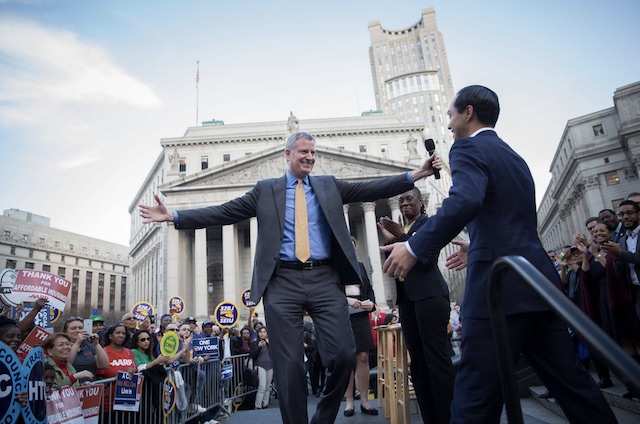 Speaking of donations: the lobbyist who helped exploit City regulations to turn a Lower East Side nursing home into a luxury condo complex funneled $50,000 to Mayor de Blasio’s recently-closed non-profit foundation, Campaign for One New York.

The Daily News reports that lobbyist James Capalino, who represented the initial seller of the nursing home for more than 200 AIDS patients at 45 Rivington Street and the eventual buyer of the property, bundled $40,000 in donations to Campaign for One New York and personally donated $10,000 more.

Deed restrictions on the property meant that it could only be used as a “not-for-profit residential health care facility.” According to the Daily News, Capalino, representing the building’s owner, VillageCare, lobbied to have those restrictions lifted.

Capalino “met with (Department of Citywide Administrative Services) employees and others” three times between February and July 2014. Mayoral spokesman Karen Hinton said it appeared those “others” did not include anyone from the de Blasio’s office.

Last February, the original owners, VillageCare sold the property to Allure Group for $28 million. According to the City, Allure pledged to run a for-profit care center there.

Roughly two months later, Capalino was hired by the developer Slate Acquisitions; six weeks after he was hired, Slate went into contract to buy 45 Rivington.

The Department of Citywide Administrative Services [DCAS] eventually agreed to lift the restriction after Allure paid a $16.1 million fee, and Slate, along with China Vanke Co. and Adam American Real Estate bought the building for $116 million. Around the time this was happening, in the fall of 2015, Capalino arranged for the donations to de Blasio’s campaign. The Comptroller's Office is investigating the City's role in the deal.

In a statement, Deputy Mayor Anthony Shorris pledged to “revamp” the deed restriction process and look into “whether the City has legal recourse.”

“The developer misled the City about the intended use of the property,” Shorris said in the statement.

“DCAS handled the issue from start to present,” Karen Hinton told us in an email. “The Mayor has never discussed the sale with anyone, including Mr. Capalino. No one in the Mayor’s office has either.”

Does the Mayor’s Office worry that a lobbyist is funneling money into the Campaign for One New York while untangling City regulations in a supposedly misleading transaction?

“Many people have raised money for the Mayor’s re-election. None has received any special treatment or consideration,” Hinton replied. “Decisions are made on the merits.”

#campaign for one new york
#corruption
#governor cuomo
#mayor de blasio
#payola
#we are swimming in bullshit people
Do you know the scoop? Comment below or Send us a Tip