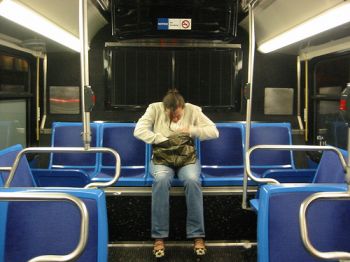 Ah, the NYC bus system, so forgiving of those who don't have change or Metrocards. Perhaps a little too forgiving? Last year bus hopping became all the rage, especially amongst the senior citizen set, and the trend is still going strong.

WNBC notes that now city transit officials want to put an end to the madness, as "data they collected shows about 130,000 riders [a week] boarding buses without paying." That's millions of dollars that could go towards their depleted budget. The Daily News chimes in, saying most "fare-beaters enter via rear bus doors that are opened by exiting passengers or by helpful riders on board. Some simply saunter past the driver and fare box up front. To reduce the risk of being assaulted, drivers are instructed not to confront or accost fare-beaters."

NYC Transit Vice President Joseph Smith doesn't have a plan just yet (in June the MTA board raised the fare-beating fine to $100), but noted that they've got their eyes on the Bronx and Brooklyn, and a crackdown can be expected in the coming weeks. So what's the worst line? Reportedly the B46 in Brooklyn, where drivers report 4,000 fare-beaters a week!

#bus
#bus hopping
#fare beaters
#free
#nyc transit
Do you know the scoop? Comment below or Send us a Tip