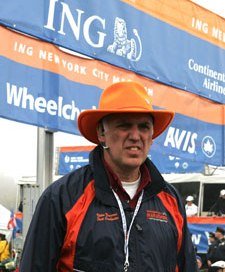 On Sunday, the worldwide running community lost an institution: Vic Navarra, a FDNY lieutenant who organized the NYC Marathon's start for 26 years, died at his home in Staten Island. He was 55 and had been battling sinus cancer.

Navarra, a lifelong runner, fell into the job of organizing the NYC Marathon's start when he couldn't run (a rib injury from responding to a fire) in 1980, when he wanted to help out and he was told to hang out with the start guy. In 1981, he started managing the start, telling the NY Times in 1996 that back then, ''We tacked up some signs on pieces of wood, put up a couple of tents. You picked a patch of grass. That was it.''

Now the race, which has almost 40,000 runners, is a complex affair; the NY Times obituary says Navarra is "credited with devising the now-standard system for kicking off a major marathon, with three starting corrals and three separate athlete villages, providing food and entertainment for the runners in the nervous hours before the race." He also started his own events management company and organized race starts around the world.

Navarra had retired from Ladder 35, Engine 40 at 66th Street and Amsterdam Avenue in 1997, but after September 11, he went to the World Trade Center site and worked rescue and recovery. In 2005, he became ill with sinus cancer, which he attributed to Ground Zero toxins.

Navarra had also been the president of the Staten Island Athletic Club and, according to the New York Road Runners' Club, At the most recent NYC Marathon, Navarra was at the starting line. He was blinded from the cancer, so his wife Joanne and daughters April and Kristie, as well as other volunteers, coordinated the start.

Funeral arrangements are planned for this Saturday in West Brighton, Staten Island. In October, Navarra recounted an anecdote from the 1993 race, when then Mayor David Dinkins wanted to pose as if he were started the marathon, which then prompted an unfortunate chain reaction. You can see video (from NY1) of Navarra here and see photographs (from the SI Advance) here.