Remembering The Homeless Who Died This Year, And The Mass Graves Where Many End Up

As we all engage in clichéd, end-of-year introspection, perhaps it's also worth our time to ask simple questions about how our surroundings have changed. "That homeless guy you used to see outside the coffee shop, where did he go?" asks a man who goes by the single name Rogers. The teacher and activist for Picture the Homeless, is sitting in a chilly room in the organization's office it shares with a church on Morris Avenue in the Bronx. "What ever happened to him? Where do homeless people go when they die?" More often than not, it means in a mass grave with 850,000 others in the world's largest publicly funded cemetery, Hart Island. On Friday, the longest night of the year, Picture the Homeless will honor and memorialize those who died without a permanent address.

PTH has faced criticism from conservative mouthpieces like the New York Post for its activism, which has included freeing up permanent housing for the city's 40,000 homeless (countless others are waiting for shelters or live in doubled-up households) and teaching those who choose to live outside it by offering seminars on effective squatting techniques (those "seminars" were actually the musings of a PTH member on his life in the 80s).

"But Friday night is a way to decouple our activism from the human engagement aspect of what we do," PTH boardmember William Burnett says. "When people see us they brand us as just 'activists.' Of course there's activism, but this ceremony cuts away those others layers. The Longest Night ceremony is about showing that these people who passed are loved, and that they deserve to be memorialized as much as anyone else." 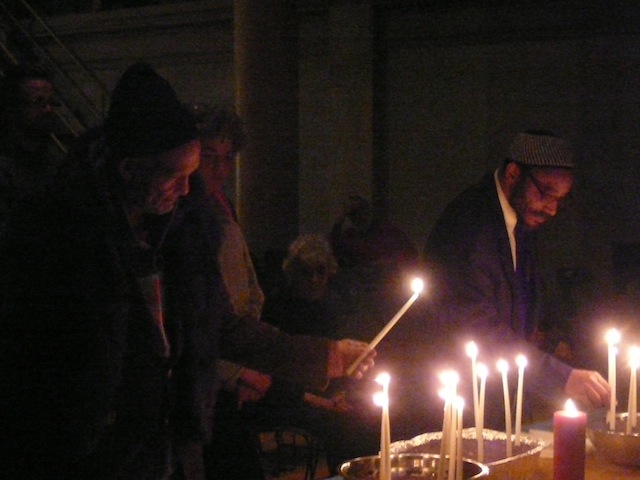 Burnett has been one of the organization's members who has led the push for City Hall to make Hart Island more accessible to visitors. As the Observer reported in September, the City Council is considering two bills that would force the Department of Corrections to create a database of those buried on Hart Island (a task that is currently undertaken by the Hart Island Project) and transfer jurisdiction of the cemetery to the Parks Department.

Currently, the DOC restricts visits to family members and occasional interfaith ceremonies, and doesn't even allow visitors to see the actual burial grounds. PTH's co-founder, Lewis Haggins, Jr., was buried on Hart Island before being disinterred and moved to a family plot in New Jersey. Today, Dr. Laurie Grant, a Hart Island Project boardmember, filed a lawsuit to force the DOC to allow Dr. Grant to visit the grave of her stillborn daughter, who was buried there in 1993. Dr. Grant found out about her daughter's Hart Island burial this year, after 18 years of seeking records from the Department of Health.

Prisoners on Rikers Island perform the burials for 50 cents an hour, and the deceased are stacked atop one another, 150 to a pit, in a practice carried over from the 19th century. "Sometimes they dig up portions of earth that already have bodies in them," notes Frank Clark, a former Rikers inmate who now works with PTH. That procedure has been disputed by the DOC, but Clark says he has firsthand knowledge of the practice. "I know they do that, because I worked the detail. It's true."

Jean Rice, a 73-year-old homeless boardmember of PTH, says that while Hurricane Sandy has forced New Yorkers to confront the issues of living without a home and shone a light on the failings of the local and federal governments, he can't help but feel chagrined. "Nobody blames the victims of Hurricane Sandy for what happened, and all these musicians and celebrities just came together to help them, and they deserve it," Rice says, referring to the 12-12-12 concert that raised over $50 million for victims of Sandy.

"But people seem to blame the homeless people for being in their situation. No one talks about the failing schools, or the inadequate government services, or people being priced out of their neighborhoods, or the decline of factory jobs. These people who died this year are people who sat at this table," Rice says. "They're our loved ones who deserve respect." 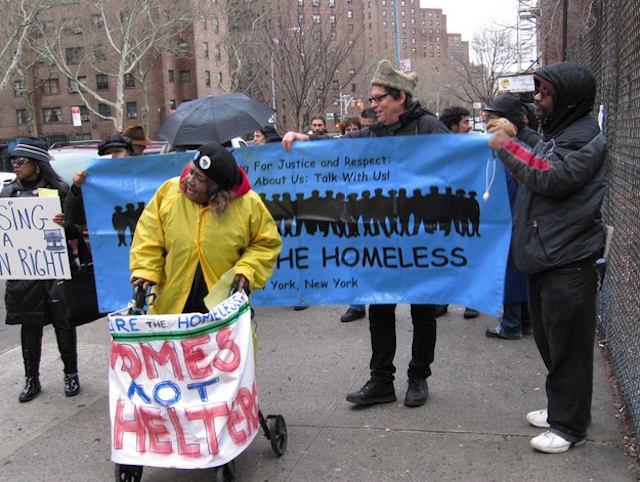 One of those who will be honored is Tanganyika "Tammy" McMillan, who died in a Bronx support home in March. "Tammy came to us with a revolutionary background," Sam Miller, PTH's communications & policy director says.

"As part of a class we give on revolutionary texts, we read historical documents about historical struggles—the Emancipation Proclamation, Letter from a Birmingham Jail, but Tammy wanted to teach a class about Chairman Mao's Combating Liberalism." McMillan, who found clerical work between bouts of homelessness, told the group that she was a former Black Panther, and had traveled to Cuba in the 70s with the organization. "A lot of people claim to be with the Panthers, but sure enough someone checked and found a newsletter she had written for the Houston, Texas branch of the Panthers," Miller says. "She loved martial arts movies, and she really loved to dance."

Miller says he doesn't know how McMillian died in the support home in the Bronx, only that she was in her 70s. "She was a powerful and compelling teacher and activist, and she's definitely missed."

Rogers, who was formerly a minister at a Catholic church in Harlem ("99% of the congregation didn't know I was homeless. Lots of people keep it private.") notes that Friday's service at Judson Church is non-denominational, but that Jewish, Buddhist, Catholic, Muslim, and Baptist ministers have all agreed to be present. "The homeless who are buried on Hart Island, who have died, they were artists, activists, writers, preachers, teachers. We want to celebrate their humanity."

#homelessness
#hurricane sandy
#longest night
#Picture the Homeless
#original
Do you know the scoop? Comment below or Send us a Tip
A new Gothamist is coming! We’ve moved comments over to our beta site. Click here to join the conversation and get a preview of our new website.