This weekend marks the 25th anniversary of the Crown Heights Riots, three days of sporadic violence, protest, and destruction that placed Crown Heights in the international spotlight and laid bare deep, bitter divisions between the neighborhood's black and Lubavitch Jewish communities.

Gothamist spoke to people who were there—activists, journalists, police, and politicians—about their recollections of the events of August 19-21, 1991, which were sparked when a black child was killed and his cousin seriously injured by a driver in the motorcade of Lubavitcher Rabbi Menachem Mendel Schneerson. We also spoke about what happened before the riots, and where the neighborhood is today.

Each day this week, we'll be running edited excerpts of our conversations. This mini oral history is not an attempt to offer an authoritative or comprehensive account of what happened during those three days. That would require a book, or several books. (The Girgenti Report, commissioned by then-Governor Mario Cuomo to analyze what happened, clocks in at 616 pages—if you're interested in the chronology of events, the Daily News did a solid write-up.) Rather, these are a series of snapshots.

The people with whom we spoke offered different, at times conflicting, narratives of what happened. When their recollections about the chronology or nature of specific events significantly diverged from published accounts we've judged to be reliable, we've noted these discrepancies and linked to relevant accounts. 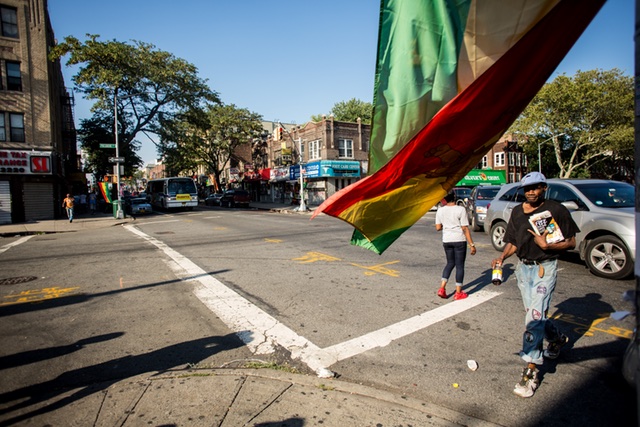 Gothamist: When you think of the riots, what's the first thing that comes to mind?

Errol Louis
Errol Louis is the host of Inside City Hall on NY1. He has written for the New York Sun, the Daily News, and Our Time Press. In 1991, he was living in Crown Heights, working for a nonprofit and freelancing as a journalist.

On one level, the actual riots were just a variation on what was an overall very tricky time to be living in that neighborhood. There was a lot of crime. We later found out that not only was there the street crime that we were all contending with, but there were epic levels of police corruption that were going on in the same precinct, in the 77th Precinct.

I live on the north side of the parkway, which is Black Crown Heights, but in some ways it's more like southern Bed-Stuy. There were a lot of problems. People hung together and lived through it, and we've all got war stories now. But at that time, I remember thinking it was just the craziest part of a very crazy situation.

I remember when it started, and it was like a hush came over the neighborhood. Either you went and got involved, in which case it was completely insane, or you just toughed it out and hung back. I was definitely in the latter category. When I saw and heard what was going on, I decided to just stay away. I figured there was nothing productive or useful that I could do.

But it was very hard to look at the news and see what was being televised to the whole world, and realize that this was like four blocks from my house.

Philip Gourevitch
Philip Gourevitch is an author and journalist. At the time of the riots, he was New York bureau chief of the Forward. He is a staff writer for the New Yorker.

I'm pretty sure that I heard about it in the night, that it had just gone off, and I went out there first thing in the morning. I had just started working as a reporter covering New York City at the Forward. What I remember most vividly as the first impression was simply getting on a subway in Little Italy on Spring Street in Manhattan on a hot summer morning with SoHo types going off to work around me and going the other way out to Brooklyn, out to Eastern Parkway, where you came out of the ground barely 20 minutes away into this urban riot scene.

There were burnt cars around, there were police lining Eastern Parkway—rioters on one side of them, Hasidic community on the other in a sort of siege mentality. It was a pretty agitated situation. Everybody tried to get their minds around what had just exploded and, of course by then Yankel Rosenbaum, the Jewish student who was set upon by a gang of black kids shortly after the car accident had died in the hospital. There was also the feeling that this was much more than a riot about neighborhood frictions.

I remember seeing this crowd coming up the street and at the front of the crowd there were some guys carrying a big banner saying "Hitler didn't finish his job." In my notebooks I've got a guy shouting at me, "It's the black Hitler who's coming this time."

News report on the first night of the riots.

Ife Charles
Ife Charles is the Center for Court Innovation's coordinator of anti-violence programs, including the Save Our Streets programs in Crown Heights and Bed-Stuy. At the time of the riots, she was working at a hospital and living in East New York.

I was young. I was 25. My mom lived on Union Street, a couple blocks away from where all this had taken place. The thing about communities is that something can happen on one block, and it will be unbeknownst to the other block for the other areas. When I came to my mom, everything was okay. It seemed as though there wasn't even a riot going on.

However, a few blocks away, there was definitely a change or a smell or a feel in the air that was not settling. It was anger, it was pain, it was disbelief, it was frustration. Some people were trying to make it calm, like Richard Green.

Mayor David Dinkins
David Dinkins served as mayor of New York City from 1990-1993. He is a professor in the practice of public policy at Columbia University's School of International and Public Affairs.

People, sometimes when they discuss Crown Heights, they speak of it as though there was several days of rioting culminating in the death of Yankel Rosenbaum. That was not the way it happened.

When the car in the Rebbe's motorcade lost control and went up on the sidewalk and struck those two children, and word went out that the ambulances had come and taken away the whites and left the blacks to die. That was not true, not at all true, but that's the word that went out, resulting in a roving band of young blacks who attacked Yankel Rosenbaum, a divinity student from Australia. He was stabbed, and I visited him in the hospital. The doctors thought he was going to recover, but they had overlooked a second wound even though the ambulance attendants had noted it. Sadly, he died.

There followed rampant rioting, and the word was that I, David Dinkins, the mayor, had held back the police and permitted blacks to attack Jews in their homes. This was not so. It was just inaccurate. There is nothing worse than being falsely accused. Ed Koch called it a pogrom.

It was sad, but what people ought to think about when they think of Crown Heights is the death of those two people.

Rabbi Shea Hecht
Rabbi Shea Hecht is the chairman of the National Committee for Furtherance of Jewish Education. At the time of the riots, he was living in Crown Heights and working for the committee.

When I think of the riots, the first thing that comes to mind is the fact that night after night, the city was out of control.

I had some frame of reference to remember the riots in the sixties, to now a riot taking place in the 90s. The real question that came about was, 'How and when is this going to end?'