Remember The Young Lords? Neither Does The NYPD, Which Is Odd...

This is a story of the NYPD spying on activists, students, and families, and the department's uniform resistance to open government laws. We're not talking about the blanket surveillance of Muslim and Arab Americans, nor the infiltration of Occupy Wall Street with undercover officers, the most infamous of which became a star player in last year's melee on the West-Side Highway. This story goes much further back, to the 1960s, with the rise of a radical Puerto Rican nationalist group known as the Young Lords.

Born in Chicago as a reformed gang, the Young Lords expanded to New York City in 1969 when a group of young New Yorkers, inspired by the Black Panthers, sought to create something similar for the city's Puerto Rican community. The group quickly made a name for itself by combining aggressive, confrontational tactics with brilliant media savvy.

Surveying residents of Spanish Harlem, the group was told that the primary concern of neighborhood residents was trash collection—the Department of Sanitation was virtually ignoring the area, and garbage was piling up. So the Young Lords began cleaning up.

"They put the garbage in bags, and then proceeded, during rush hour on a Friday, to dump the garbage in the middle of the streets," says Johanna Fernandez, a Baruch College professor writing a book on the movement. Putting a finer point on their message, they set some of the trash on fire. "They conduct these garbage campaigns over a few weeks," Fernandez says, "and before long there's a lot more garbage pickup in East Harlem." 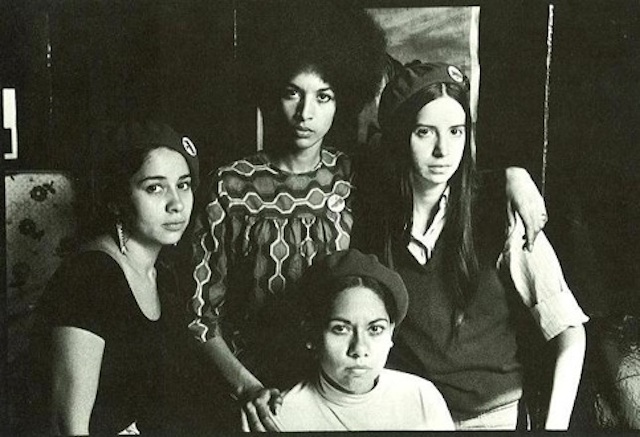 "Women of the Lords" (Michael Abramson)

The Young Lords also partnered with sympathetic physicians to test children in the neighborhood for lead poisoning. When they determined that 30 to 40 percent of the kids were testing positive, they hammered the issue, holding press conferences and occupying the office of the Department of Health.

"Their muckraking is credited with pressuring the city to develop the bureau of Lead Poisoning in 1970," Fernandez says. "They took an issue that was already percolating in city politics and they added flair to activism around it. They used the media quite strategically."

In 1969, they took over a Lexington Avenue church, briefly running a day-care center and a community services center before their eviction and arrest. The next year, the Young Lords occupied Lincoln Hospital, publicizing the horrific conditions the hospital's black and Latino patients were subjected to.

All along the way, the NYPD was keeping close watch. "[The police] were provocateurs," says Fernandez. "They engaged in an enormous amount of surveillance of the group. And they had members of the NYPD who came to the office of the Young Lords on Madison Avenue and asked to join the organization for the purposes of undermining the work of the group." 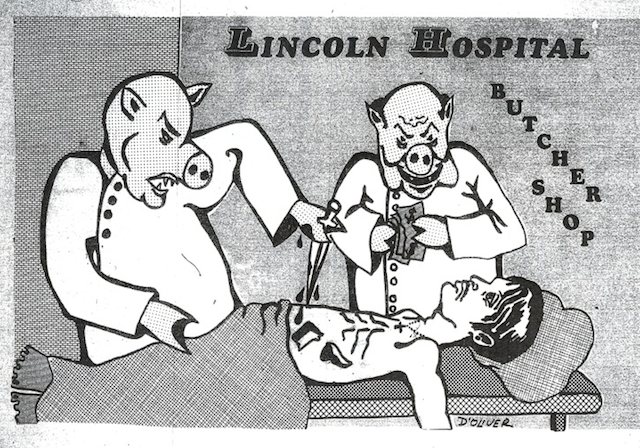 An illustration made by Denise Oliver, an African American member of the Young Lords' steering committee, published in the group's newspaper, Palante 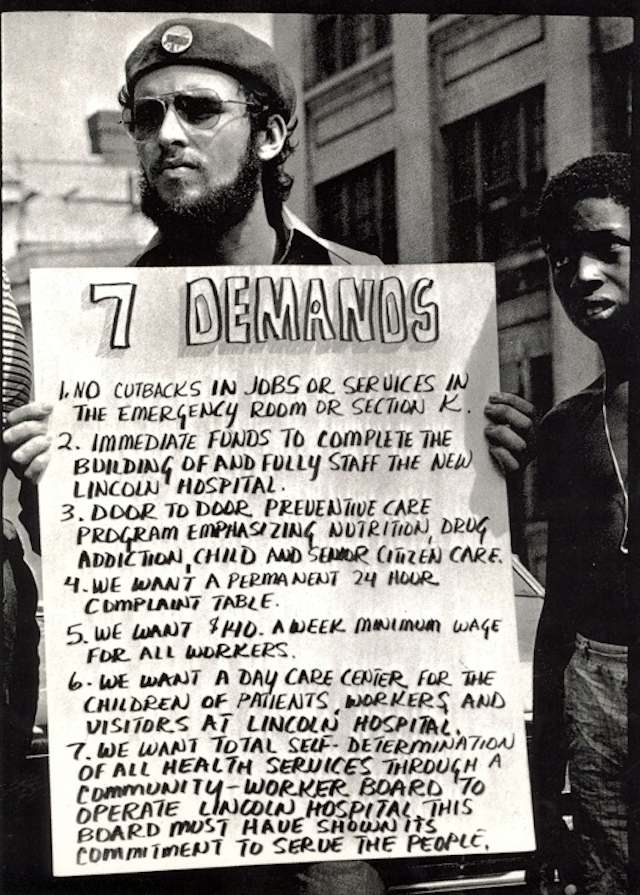 Fernandez's research has already turned up a small treasury of documents from the NYPD and other law enforcement agencies related to the Young Lords—some of it possibly brought to light by the 1971 robbery of a Pennsylvania FBI office that exposed the COINTELPRO program.

One NYPD memo from August of 1969 describes a rally led by one of the New York chapter's leaders,

one, Felipe Luciano, M/N/18, with bushy kinky hair and trim moustache, whose speech consisted mainly of a series of vulgarities in which he attempted to get sympathy from the 50-75 spectators from the Puerto Ricans in the community. Among his requests were that the Puerto Ricans refrain from allowing the white M..... F...... to run their community, and for Puerto Ricans to fight for their rights. He stated that one of their members, a Manuel Ramos, had been shot in cold blood by the M.F. Pigs and that they do not intend to let this happen again.

Some of the NYPD documents verge on the comical in their meticulous observation of the daily tedium of organizing. Reporting on a Puerto Rican student conference held at Columbia University, officers diligently list the conference's breakout groups ("role of women; contemporary Puerto Rico; high school students") before concluding, “a dance was held in Ferris Booth hall to culminate this conference, which terminated at approximately 2400 hours, without incidents, disorders, or arrests."

Eventually, the Young Lords fizzled out, riven by infiltration, infighting, and an ill-advised move to Puerto Rico to take up a war of independence. In part because of their acute awareness of NYPD surveillance and repression, the group didn't keep a lot of records of their activities.

"In many instances they had to destroy documents in order to protect their comrades," Fernandez says. Ironically, that means that for historians like Fernandez, one of the best archives for understanding the Young Lords lies in the hands of the law enforcement agencies that worked to undermine and destroy them.

But Fernandez knew there ought to be records, because she'd already tracked down documentation of NYPD surveillance of the Young Lords from other sources. In December she appealed, including some of those documents in her letter. The NYPD issued a final rejection of that appeal later that month, saying it really couldn't find any such records.

Yesterday, Fernandez challenged the ruling in court, filing an Article 78 petition in New York Supreme Court to get the documents.

Of course, the heyday of the Young Lords was more than 40 years ago. Is it really reasonable to expect the NYPD to maintain documentation of its activities going back that far?

"The records were required to be preserved," says Gideon Oliver, Fernandez's lawyer. 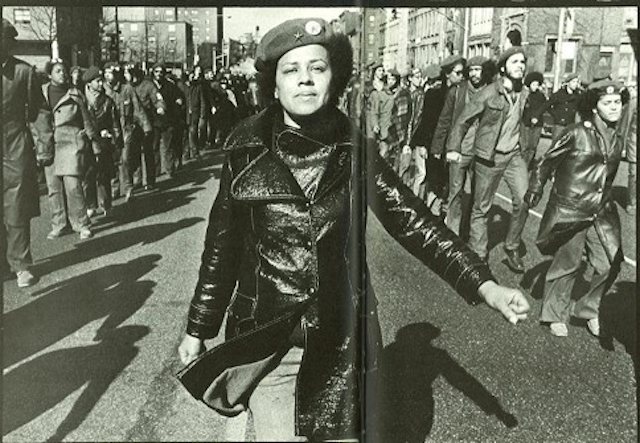 Handschu vs. Special Services Division, the epic legal battle over the NYPD's surveillance of activists and social movements in the 1960s and 1970s, led to a settlement best known for the restrictions it imposed on the NYPD's ability to spy on people who aren't committing crimes.

The settlement also stipulates that "No intelligence of political files, pre-1955 or post- 1955, can be destroyed without the express approval of the City's commissioner of records and information services” and the City's Corporation Council.

The NYPD doesn't seem to have any record of the destruction of the documents or notice of the files' transfer, and Fernandez hasn't been able to find any of the records in the municipal archives, so just what's going on remains unclear.

Perhaps the NYPD is still sitting on the documents, and isn't turning them over. Maybe the documents were destroyed, in violation of the Handschu order. Or the files are moldering unindexed and forgotten in some municipal closet. The NYPD declined to comment for this story.

"If there weren't responsive records, there should have been a response nevertheless that told the story of where the records ended up," Oliver says.

Regardless, Fernandez says finding the files and getting them into the historical record is important.

"What's important about access to these documents is that they're critical to really understanding the history of our city and our nation," she says. "What happened to the Young Lords and these groups, and why don't we know more about them? Access to these records is part of understanding and analyzing the history of one of the most important decades in American history."

Nick Pinto is a freelance writer living in New York. He recently wrote about the travails of the CCRB and a massive natural gas pipeline being built under the Rockaways.

You can read some of the NYPD's surveillance records of the Young Lords below.