Remarkable Maps Show Routes Of Every Cab Ride Since 2009

Presented with the TLC's public dump of all pickup and drop off data from January 2009 to June 2015, software developer Todd W. Schneider has created glowing, aerial maps that trace every single taxi pickup and drop off made over the course of the last six-and-a-half years.

"I’m certainly not the first person to use the public taxi data to make maps," writes Schnieder in his analysis. "But I hadn’t previously seen a map that includes the entire dataset of pickups and drop offs since 2009 for both yellow and green taxis."

The maps are striking, if not revelatory. Green dots represent green boro taxi pickups or drop offs (depending on the map), and white dots represent yellow cabs. The brighter the region, the higher the concentration of taxi activity. Yellow cab pickups are concentrated south of Central Park in Manhattan, while drop offs spread north and east into Brooklyn, Queens and the Bronx; drop off and pickup activity snakes like a glowworm from Manhattan to the airports: along the Van Wyck Expressway to JFK, and by 278 and 495 to La Guardia.

Here are the high-resolution maps for pickups and drop offs. 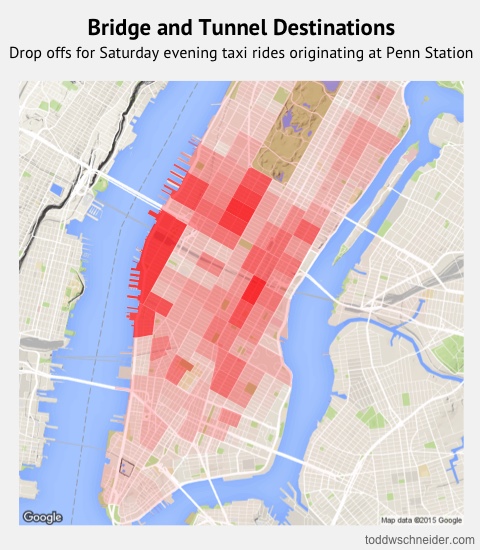 But rather than simply map the data as given, Schneider built a series of accompanying maps and graphs that trace the activity of demographics that, he figured, use taxis regularly—investment bankers, for example, and bridge-and-tunnel weekend partiers.

To paint a picture of where New Jersey and Long Island people spend their Saturday nights, Schneider isolated taxi trips originating near Penn Station on Saturdays between 6:00 p.m. and midnight (Penn Station funnels in B&Ts from the Long Island Railroad and New Jersey Transit). The darker the region, the more Penn Station drop offs (see Murray Hill, the Meatpacking District, Chelsea, and Midtown). The second map zooms in on Murray Hill, which conveniently pinpoints blocks to avoid on a Saturday unless you are wearing noise-canceling headphones. 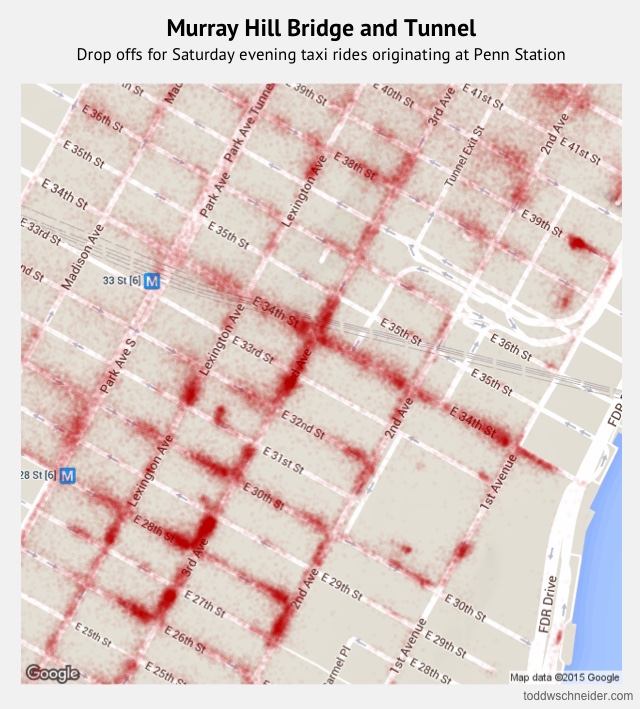 Schneider also graphed the frequency of taxi drop offs in Goldman Sachs' dedicated driveway at 200 West Street on weekday mornings, and found that the traffic starts building up around 5:00 a.m., and is most congested between 7:00 and 9:00 a.m. 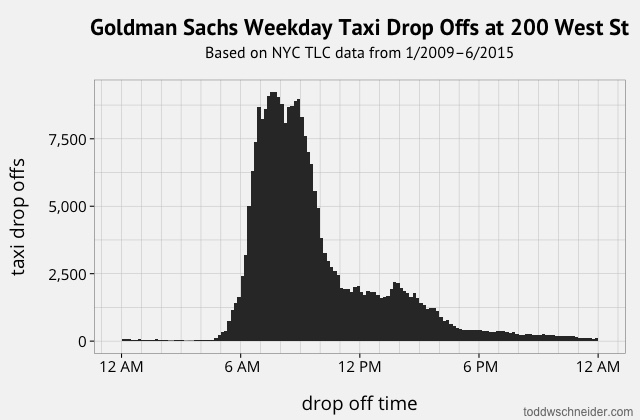 And for an alarming gentrification time-lapse, here's a gif of taxi drop offs bleeding into North Williamsburg from early 2011 to late 2014.

You can check out all of Schneider's analysis here, including Uber trip comparisons, airport traffic analysis, and the impact of weather on taxi trips over time.

#maps
#taxi
#traffic
#uber
Do you know the scoop? Comment below or Send us a Tip