It appears Park Slope is plagued by more than just fake pregnant tarantulas and over-caffeinated infants. In fact, residents of Park Slope, Prospect Heights and Bedford-Stuyvesant say they're being besieged by noise pollution thanks to planes flying into LaGuardia Airport—a problem they've been dealing with for years, but seems to have gotten worse over the past few months.

"The planes are coming in at much lower altitude as they're coming over the water, and they stay at that altitude for entire length of Brooklyn," Jeffrey Starin, President of Prospect Park Quiet Skies, told Gothamist in an interview. A message board on the group's website is flooded with noise complaints: "A PLANE OVERHEAD EVERY 45 SECONDS. WHAT HAPPENED TO OUR PEACEFUL NEIGHBORHOOD? SOMETHING MUST BE DONE!!" reads one message. "I live in Prospect Heights on Butler Pl. The planes go over my apt every 3 minutes. The noise is deafening, I am unable to hold a conversation with people next to me. It is unbearable and am thinking of selling. I cannot live like this," reads another.

A few years ago, the Federal Aviation Administration implemented something called NextGen, a National Airspace System that allows planes to fly closer together at low altitudes, reducing gridlock on tarmacs and in the sky. The new system was also supposed to reduce noise, particularly in densely populated areas, but according to Starin, that hasn't been the case. "If [the FAA] wanted to, they could use Nextgen technology to reroute planes over the river," he said. "Instead, they're just overlaying flight tracks on old existing flight tracks, but increasing the number of airplanes. They've lowered the altitude and increased the number of flights." 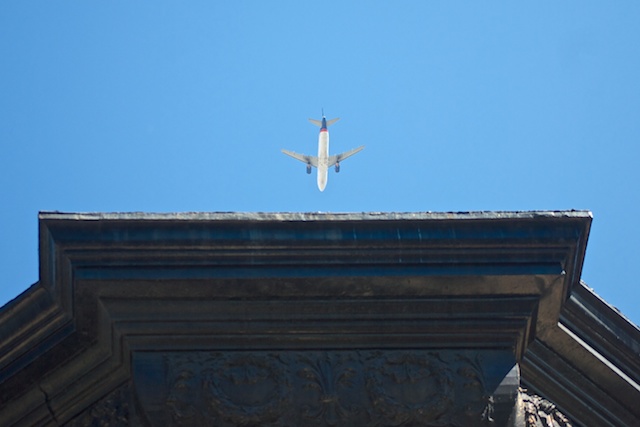 Starin says elected officials have done little to help alleviate the noise. "There's a categorical exclusion, a federal loophole [pdf] in National Environmental Policy Act (NEPA) that allows the FAA not to do environmental studies for flight procedures that they deem are not damaging to the environment or people," Starin said, adding that he has been unable to get Senator Chuck Schumer, who reportedly signed off on the legislation, to talk to him. "A group of us went to his office, and he wouldn't come out to talk to us. He sends out a staffer to talk to us, but nothing happens."

Schumer's office did not respond to our request for comment.

Officials say there isn't much that can be done on a local level, and a source close to Councilmember Brad Lander, who represents the district, says that while they're aware of the issue, the problem is in the hands of the FAA. Craig Hammerman, Brooklyn Community Board 6's district manager, echoed that. "We've looked into this complaint many, many times in the past and it always comes back to the same answer—the regulation of airspace is a Federal issue, not something any City agency or department has any jurisdiction or control over," Hammerman said.

He noted that Schumer's office had been helpful in setting up meetings with FAA officials and the Port Authority during his time as a Congressman. "Nonetheless, the air traffic over Prospect Park is in the approach to runway 3-1 at LaGuardia Airport and by the time they get to us the planes are around 1,000-3,000 feet overhead, which is quite low and loud," Hammerman told us. "Prospect Park is an emergency landing zone, which is partly why they use the trajectory which brings them over our neighborhood. And the Federal government has been unable to find a way to reduce the impact these low-flying planes have on our district." 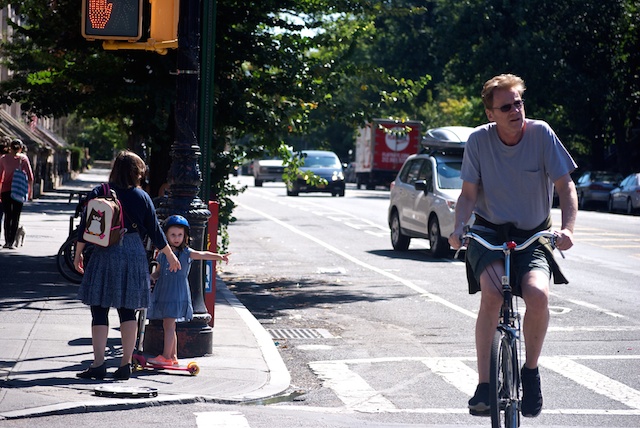 Residents say the noise seems to have gotten worse. "Lately in particular, it’s become much much much more frequent, and I hate it, it’s terrible," Park Slope resident Kevin Doyle told us. "They’re so low, and there’s so many kids and dogs. There’s gotta be a way for them to plan that so they’re over the water. Personally, living here, I hate it." Added resident Diane Field, "It certainly doesn’t bother us in our apartment but, here in the park and on the playground, it can get pretty loud."

In an interview with The Daily Beast last month, actress and new Park Sloper Chloe Sevigny complained about the planes. "I moved out to the dorkiest, hokiest neighborhood—Park Slope—and I’m really feeling the vibes out there," she told the website. "But the flight patterns out there are constant. I’d read a bit about it in the New York Times, but I didn’t realize how bad it was ‘til I moved out there—planes constantly buzzing overhead."

The FAA tells us they "have not made any changes to air traffic routes over the Park Slope and Flushing, however, there has been an increased usage of air traffic routes that go over those areas due to predominant winds from the north." One source tells us the FAA prefers aircraft land and take off into the wind, so wind direction determines which runways they'll be using each day.

To be sure, Park Slope and its surrounding neighborhoods aren't the only ones being pummeled with plane noise—flights coming in and out of LaGuardia and John F. Kennedy Airports have been torturing sections of Queens for years. "It’s like having screaming jet engines right over your house,” Bayside resident and Queens Quiet Skies founder Janet McEneaney, told the Times last year. “You can’t even have a conversation in your own living room. You can’t hear the television. You can’t talk on the phone.”

On Sunday, the group will hold a rally [pdf] at Cunningham Park in Fresh Meadows to protest airplane noise. A number of elected officials are expected to attend.

UPDATE: Senator Chuck Schumer's press secretary Meredith Kelly has passed along this statement: "Senator Schumer is a resident of Park Slope, is aware and very concerned about airplane noise, and has been in touch with the FAA. He has already scheduled a meeting with many of New York's groups that care about airplane noise, and he will do everything he can to try and abate it."

#airplanes
#brooklyn
#faa
#park slope
#plane noise
#queens
#original
Do you know the scoop? Comment below or Send us a Tip