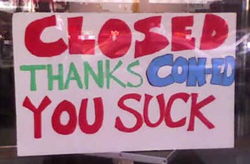 It was only half of what Con Ed was asking for, but employees of the State Public Service Commission (PSC) recommended that the utility be allowed to raise rates by the highest amount in the company's history. ConEd wanted to raise rates by $1.2 billion and the PSC officials said that it recommended a hike of $618 million. The New York Times reports that the recommendation was made by members of the PSC's professional staff, and that their view generally carries a lot of weight with the commission. Other parties like Con Ed and the City have until September 28th to comment on the proceedings. A state legislator from Queens was unimpressed with the announcement:

“This is all part of the sham that goes on with every rate hike request,” said Assemblyman Michael N. Gianaris, a Queens Democrat who sits on the Assembly’s power committee and who has criticized the utility for its response to the 2006 power failure in his borough. “Con Edison asks for more than it expects to get,” he said. “The P.S.C. rides in on its white horse and takes credit for slashing the request. But the end result is still what Con Edison wanted all along.”

The Times says that while the highly technical figures released to the public regarding the rate hike requires some time to see exactly how much of an increase the recommendation would impact residential and business customers, the $1.2 billion proposed increase would have meant a 17% jump in residential customers' Con Ed bills. It is the first rate increase for the utility since 2004 and would go into effect in April 2008. The New York Post points out that the increase would help keep New York residents #1 in the nation in what they pay for their electricity and that excluding generating costs, the hike would be a 36.8% jump in the money paid to maintain Con Ed's physical infrastructure.