After the homicide stat-touting banners were unveiled and Marty Markowitz presented his giant styrofoam gag gift, Mayor Bloomberg got to the business of actually delivering his 12th and final State of the City address at Barclays Center this afternoon. You can read the full transcript of the speech below—Beyonce's husband shout-outs included—and we've also picked out ten of the most notable, important, tantalizing and frustrating quotes from the very long speech. There are also a few graphs to help give some perspective to the speech. It's just like you were there listening to it—the only thing missing is Bloomberg's instructions on when you should clap.

“But we know that there’s more we can do to keep New Yorkers, particularly young men, from ending up with a criminal record. Commissioner Kelly and I support Governor Cuomo’s proposal to make possession of small amounts of marijuana a violation, rather than a misdemeanor and we’ll work to help him pass it this year. But we won’t wait for that to happen.

Right now, those arrested for possessing small amounts of marijuana are often held in custody overnight. We’re changing that. Effective next month, anyone presenting an ID and clearing a warrant check will be released directly from the precinct with a desk appearance ticket to return to court. It’s consistent with the law, it’s the right thing to do and it will allow us to target police resources where they’re needed most.

“We’re already the most tech-friendly, transparent government in the country and now we’re raising the bar again. We’ll make New York City a national leader in another new technology: electric vehicles. This year we’ll pilot curbside vehicle chargers that will allow drivers to fill up their battery in as little as 30 minutes as opposed to the normal 8 hours.

We’ll work with the City Council to amend the Building Code so that up to 20 percent of all new public parking spaces in private developments will be wired and ready for electric vehicles, creating up to 10,000 parking spots for electric vehicles over the next seven years. We’ll add 50 more electric vehicles to the city’s fleet of cars, and we’ll put the first six fully electric taxis on the road - with the goal of making one-third of our taxi fleet electric by 2020. We’ll also make permanent the East River ferry service that we started in partnership with Speaker Quinn and the Council - which has been a huge success.

3. So Is Bike Share. And Marty Is So Super Stoked!:

“And the biggest change to our transportation network in ages is coming this summer: the largest bike share program in the country. I know Marty can’t wait. Bike share has been successful and popular in every city it’s been tried - and here, it will offer New Yorkers more options to get around town faster.

A graph of the word count from the speech (Gothamist)

“But as we all know, charter schools are public schools and their students deserve access to public school facilities. How dare the special interests try to lock out our children. We are one city and one public school system and we will not tolerate those who try to deny resources to some public school children. That’s why we've also put our bus contracts out to bid. For more than 30 years, the unions and the bus companies have had a virtual monopoly on the contracts. This week, we received the opening bids for the new contracts and there's the potential for hundreds of millions of dollars in savings. We will plow that money back into our schools where it belongs.

I'm glad to report that every day more and more buses are on the road transporting our students to school. I urge all bus drivers to return to work and I urge Local 1181 leaders to recognize their strike is a lost cause, and to stop hurting our children and their members. If you notice, we haven’t had a lot of political support in taking this issue on. But that's exactly why we’re doing it: because it's the right thing to do and if we don’t do it now it may never get done. And our children will be worse off for another three decades. We won’t let that happen.

5. Talking About Stop-And-Frisk Without Ever Mentioning The Word "Frisk:"

“I understand that innocent people don’t like to be stopped. But innocent people don’t like to be shot and killed, either. Stops take hundreds of guns off the street each year. Today, we are collecting fewer guns, but that is not an excuse to stop it - it is a reason to continue it. Because the possibility of a stop is what scares would-be bad guys into not carrying guns. And if we never find a gun again in a stop, wouldn’t that be wonderful?

Commissioner Kelly has adopted training and accountability policies to ensure that police officers conduct stops legally, appropriately, and respectfully but make no mistake: We have a responsibility to conduct them and as long as I am mayor, we will not shirk from it. Think about it: if New York City had Detroit’s murder rate last year, 4,092 more New Yorkers would have been murdered last year. That’s every person in this room and enough to fill up a few thousands seats in the arena behind me. We know stops save lives. Is there anyone here who would sacrifice his or her life, and the lives of their family and friends, to end stops? I don’t think so. 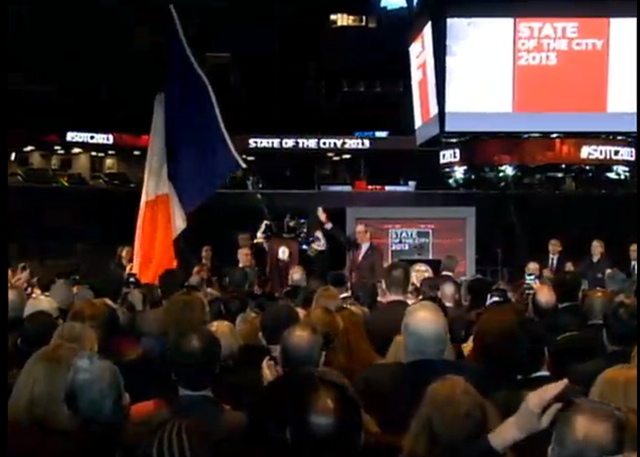 6. He Is A Big Fan Of The Waterfront...But Not Robert Moses:

Our administration has fundamentally changed the way we conduct waterfront development. But Sandy raised the bar - and now we must rise to the occasion. This year, we’ll develop a long-term plan so that when extreme weather hits - we’ll be able to get the lights back on quickly and ensure that the heat keeps working, the gas stations stay open, the hospitals maintain power and the transportation system keeps operating. By the end of May, Seth Pinsky, who is leading this effort, will deliver a report on how we can better protect our city from extreme weather events. But as I’ve said: we’re a coastal city, so we cannot - and will not - abandon the waterfront.

7. There Are A Lot Of Unfinished Projects He Is Planing To Complete In The Next 320 Days:

“In fact, this year we’ll complete the second stage of the single largest construction project in the City’s entire history: the Third Water Tunnel. When we open it, it will be a dramatic reflection of our commitment to funding vital infrastructure projects in good times and bad and an incredible testament to all the sandhogs who built it and deserve our thanks for the dangerous work that they do every day.

The Third Water Tunnel is just one of many big projects that are supporting our economy, growing our tax base, and making our communities better places to live. On Staten Island, thanks to support from Borough President Molinaro and Minority Leader Oddo, we’re building the largest new park since the 1930s at Fresh Kills. At Ocean Breeze on Staten Island, we’ll finish construction of one of the largest track and field complexes on the East Coast - and our largest PlaNYC recreational center.

Across the bay in Lower Manhattan, next to the National September 11th Memorial and Museum, the Port Authority is completing 1 World Trade Center, the tallest building in the Western Hemisphere. In midtown, we’re helping the New York Public Library build the largest circulating and research library in the world.

At Hudson Yards, the MTA will finish construction on the Number 7 train extension, the first new subway track to be funded by the City in 50 years - and the catalyst to the most ambitious development ever undertaken in our City. Next door, the High Line - once slated for demolition - will complete its third leg next year. All of these projects will strengthen our economy and our communities. All over the city, we’re renewing our landscape in ways that create good jobs for New Yorkers today, and position us to lead the innovation economy of tomorrow."

8. He Wants More Hostels To Attract The Youths:

“Even though we’ve become the number one tourism destination in the country we still have unfinished business. Right now, we’re missing out on an important piece of the market: the young people who have an itch to get out and see the world on modest budgets. Hotels in our city can be out of their price range. So working with Speaker Quinn and the City Council, we’ll pass legislation to make New York a more youth-friendly tourism destination by legalizing the for-profit youth hostels that are so common in much of Europe. Our goal is to attract 175,000 more young tourists to our city each year which will create more than 1,000 new jobs for New Yorkers.

9. He Has A New Favorite Word: "Obstructionists":

“Over the past eleven years, we have beaten the odds, and the obstructionists, over and over again, not just here in Brooklyn, but in neighborhoods all across the city.

We won’t rush the re-zoning—but we won’t allow obstructionists to run out the clock, either. This is too important for our future. And given all the politics and special interests, if we don't do it this year, it may never get done. We can't let that happen.

10. It's Only A Matter Of Time Before Bloomberg Has A Bridge Or Highway Named After Him:

“For the first time since La Guardia was mayor and FDR created the WPA, we’re not only conceiving big plans that fundamentally change the landscape of our city, we’re achieving them. We’re taking a city built mostly before World War II and renewing it for the needs of New Yorkers today and tomorrow. But we still have plenty of unfinished business in all five boroughs.

Bloomberg State of the City Speech by

#bloomberg
#electric cars
#hubris
#marijuana
#mayor bloomberg
#pot
#reform
#state of the city
#weed
#original
Do you know the scoop? Comment below or Send us a Tip