The mystery of the red-wigged bank robber who managed to take about $100,000 in cash from a NJ bank appears to be over. The FBI says a female suspect was arrested in Atlantic City yesterday—and she's accused of robbing a bank in Connecticut, too.

To recap, last month a red-wigged bank robber toting a large gun demanded money from a Glen Rock Savings Bank teller on February 18th. It was unclear if the suspect was a man or a woman, so cops simply described the robber as wearing a black coat, white boots, and black gloves and carrying a handbag. The weapon was dumped outside the bank, and it turned out to a paintball gun.

On January 30th, a female suspect robbed the Greenwich Bank and Trust Company in Greenwich, Connecticut. The police described her as "a white female, approximately 40 years old; short, weighing about 100 pounds, with dark hair in a pixie cut, wearing sunglasses and a dark peacoat.” 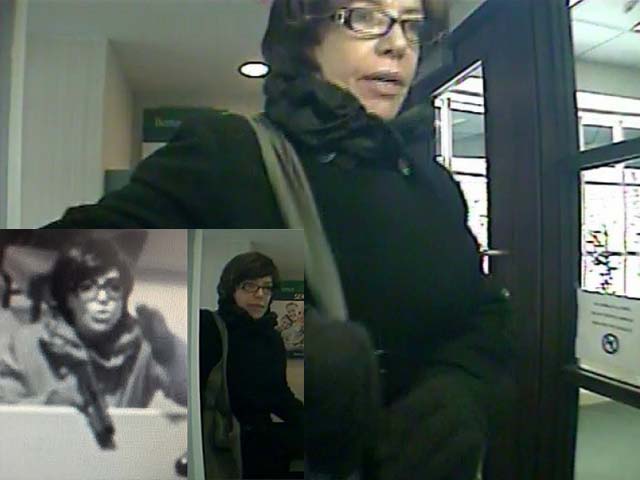 The suspect in Greenwich

In that incident, WCBS 2 reported, "In the [surveillance] video, she is seen gesturing with her left hand as she barks at the teller, and holding a gun so large in her right hand that she has to rest its large barrel on the counter."

The suspect is apparently from White Plains, NY. No other details have been released.