After Gothamist reported that the only way to access the public spaces on Pier 17 to watch the July 4th fireworks display was to buy a $492 ticket to a Jean-Georges event or get an invitation to a rooftop VIP party, Howard Hughes Corporation, the developer of the space, rented the South Street Seaport's Wavertree cargo ship for 300 members of the community to catch the show on Pier 16.

Manhattan Borough President Gale Brewer said that while this was a step in the right direction, she was still not satisfied with the arrangement.

"I spent a lot of time as Borough President on the Uniform Land Use Review Procedure for Pier 17, and I have a task force on the South Street Seaport area, so I happen to know that under the restrictive declaration, that 10,000 square feet on the pier is supposed to be for the public," Brewer said. "So that upsets me that there's only 300 free tickets for the public and yet there's 10,000 square feet of closed public space. Doesn't seem to me like a fair trade off."

Brewer is referring to the agreement Howard Hughes made with the City, which stipulates that the developer keep 83,000 square feet of outdoor space open to the public 24 hours a day. While Pier 17's roof access "may be limited from time to time when the roof is used for private parties, corporate events, and other special events," the agreement states that at least 10,000 square feet of space on the roof "will be open to the public without charge or fee at all times when the building is open...and will not be subject to closure for [private events]."

"EDC or the City, not the [South Street Seaport] museum and not Howard Hughes, should be having some kind of a lottery or whatever 10,000 square feet is for the public," Brewer said. "Like they do for events in Central Park."

Brewer added, "I understand the security concerns but I know if there had been more of a discussion with the community and the elected officials and so on but...this is public space! You need to have more opportunities for the public to get in and not just the people who can afford to pay $492." 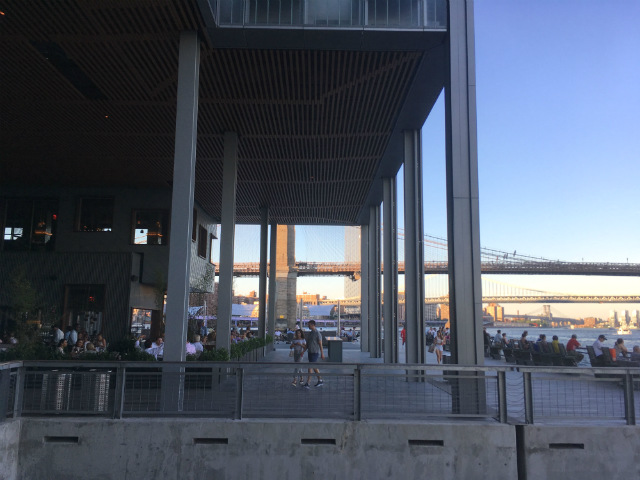 The Fulton by Jean-Georges on the left, public space on the right at Pier 17. (Gothamist)

It's not entirely clear what those safety and security concerns are for Pier 17. A spokesperson for the NYPD said that Water Street is closed to traffic as part of the 4th of July operational and safety plan, as is South Street because it's a fire lane, but Pier 15 will be open to the general public.

Pier 17 is open to only private tenants, and the police spokesperson compared it to a New Yorker having access to their apartment on the Macy's Thanksgiving Day Parade route.

This analogy is not apt: most people's apartments don't have lease agreements that explicitly require them to keep 10,000 square feet of roof deck space open to the public, even when they are closed for private events.

A spokesperson for Howard Hughes said that the company is "underwriting many of the operational costs associated with the July 4th fireworks."

"We invite all to come celebrate the holiday throughout the Seaport’s historic district, where the cobblestone streets will be open to the public free of charge on a first-come, first-served basis. NYPD will be blocking off areas east of South Street to ensure the safety of the public. Piers 16 and 17 will be accessible to credentialed guests of Macy's," the spokesperson wrote in an email.

The city's Economic Development Corporation, which is responsible for overseeing Howard Hughes' lease, says the setup is legal because when the NYPD closes Pier 17, the developer and their subtenants can throw ticketed events.

But how "closed" is Pier 17 if it's actually open to hundreds of people who are VIPs, or could afford a $492 ticket, or are just friends of people working at Macy's or NBC, which is broadcasting the show to millions of viewers?

"NBC, the Howard Hughes Corporation and the Administration knew well ahead of time of the safety precautions they needed to follow to justify closing public access to piers from the Maritime Building all the way to Pier 35, yet no one from the community—including my office—received notification until it was too late," Councilmember Margaret Chin told Gothamist in a statement.

"Now, instead of relaxing this holiday weekend, families in my district are left to figure out last-minute plans and deal with unnecessary inconveniences as a result of this bungled outreach process. This lack of transparency is unacceptable, and should never happen again."

Another programming note: Pier 35 on the East Side of the Manhattan Bridge, will also be closed to the public. But there are spots on the FDR and in Brooklyn Bridge Park where the public can view the fireworks, first-come, first-served. Some sections of Brooklyn Bridge Park will be off limits due to safety issues and park maintenance concerns, but Eric Landau, President of Brooklyn Bridge Corporation, told Gothamist, "No parts of the park space will be used for VIP, ticketed viewing areas. We're a public park, period."

Tickets for the Jean-Georges party at Pier 17 are still available at $492.28 apiece.

See our full guide of where to watch the 2019 fireworks here.

#howard hughes
#july 4
#pier 17
#south street seaport
#original
Do you know the scoop? Comment below or Send us a Tip