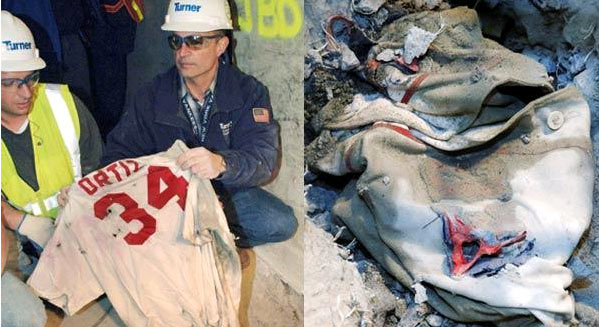 Above image from WABC 7, below images from WNBC 4

Leaving no potential curse to chance, the Yankees had the Red Sox jersey (allegedly) buried in cement at the new Yankee Stadium removed with great fanfare in front of press yesterday. The David Ortiz jersey, buried by a Yankee-hating construction worker, was found thanks to a $50,000 excavation in the future behind-home-plate restaurant.

Yankees President Randy Levine said the team was initially going to leave the jersey where it was, "The first thought was, you know, it's never a good thing to be buried in cement when you're in New York. But then we decided, why reward somebody who had really bad motives and was trying to do a really bad thing?" And $50,000 is a small price to pay instead of future headaches of "The Curse of the Jersey."

As for the construction worker who buried the jersey, Gino Castignoli told the Post, "Anybody with half a brain knows it was all done in fun. I didn't hurt nobody." Still, Yankees Chief Operating Officer Lonn Trost said, "We were in touch with the DA of the Bronx and the ADA and we were discussing, analyzing and understanding whether or not there is criminality involved whether it is mischief or criminal mischief or trespassing or in fact nothing."

The jersey will be donated to the Jimmy Fund, part of the Boston-based Dana Farber Cancer Institute. Levine said, "Hopefully the Jimmy Fund will auction it off and we'll take the act that was a very, very bad act and turn it into something beautiful."

And Levine thanked the Post, for making this their lead story for the past few days--"We want to thank The Post for raising this issue"--which is probably why the Daily News is quiet on the jersey front.

#david ortiz
#excavation
#jersey
#new Yankee Stadium
#randy levine
#red sox
#Red Sox jersey
Do you know the scoop? Comment below or Send us a Tip
A new Gothamist is coming! We’ve moved comments over to our beta site. Click here to join the conversation and get a preview of our new website.