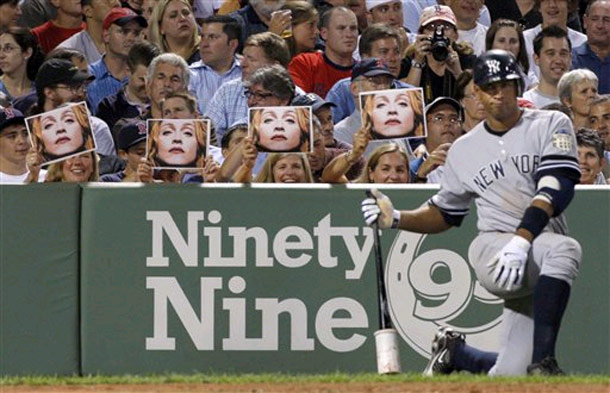 Though fans were armed with photographs of Madonna, who allegedly used Kabbalah to lure A-Rod, the Sox still lost to the Yankees (and A-Rod was 2 for 4). Sox fans are also probably ruminating over their star player Manny Ramirez, who was absent last night, prompting frustration and speculation.

The Yankees will play the Red Sox again today at 3:55 p.m.--it'll be Andy Pettitte vs. Tim Wakefield.

#a-rod
#alex rodriguez
#boston red sox
#C-Rod
#Cynthia Rodriguez
#divorce
#kabbalah
#miami
#red sox
#sports
#Yankees
Do you know the scoop? Comment below or Send us a Tip
A new Gothamist is coming! We’ve moved comments over to our beta site. Click here to join the conversation and get a preview of our new website.