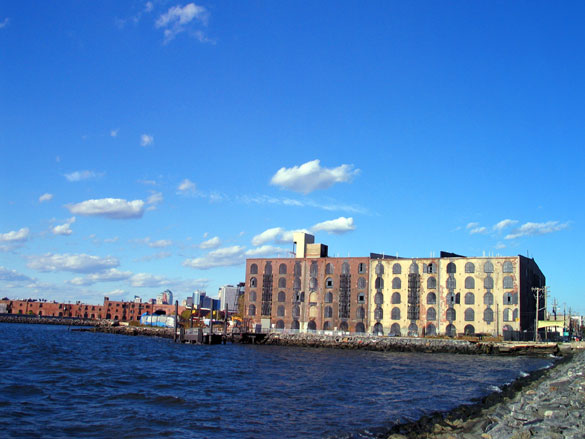 Adam Sternbergh chronicles the neighborhood's ups and downs - for pre-gentrifiers, the stroller set and real estate enthusiasts, of course. He tells the story through a 30 year-old named Ivy Pochoda, who grew up in Cobble Hill when "Smith Street was still too sketchy to walk home on alone." (NB: Smith Street still was sketchy into the 1990s.)

Pochoda knew it was time to leave Red Hook when she saw two pretty-faced girls on Pioneer St. in tapered jeans and flats. Oh no, not tapered jeans and flats! The gist of the story is that, marked by the closing of the Pioneer bar, bistro 360, and the Hook, the wheels of Red Hook gentrification are going in reverse. The larger idea is that gentrification isn't self-sustaining - and "dying" Red Hook is the example.

Just as the hype surrounding Red Hook over the last few years was totally overblown, so is the thesis that Red Hook is done. Instead, the reality is probably somewhere in between. While economic development was slower than expected, the neighborhood still saw a 30 percent increase in property values over the last year. It's amazing to us, at least, that it's come this far, given how long it takes to get there (sans car). Our take is that Red Hook can't become DUMBO overnight until the transportation conundrum is solved. And remember that Red Hook still hosts Brooklyn's last working port, which is barely mentioned in the piece. Neither are the thriving ballfields.

NYPD-detective-turned-Red-Hook-building-owner-and-Jane-Jacobs-enthusiast Greg O'Connell pretty much sums up the story we've been hearing this season:

"It used to be that if you were from Okefenokee," he tells me, "and you were the best dancer in the world, the idea was that you could come to this city to make it. You’d live three in a room if you had to. But now the three-in-a-room places are disappearing. And you need that balance or you choke the life from the city."

His suggestion to someone young with money? Move to Buffalo!