Squinting over maps of the proposed Brooklyn Queens Connector route at the Red Hook Recreation Center on Thursday, locals wondered how Mayor de Blasio's $2.5 billion streetcar would fit on their narrow and truck-trafficked streets and—considering that those streets lie on a vulnerable flood plain—whether that hypothetical was even worth considering.

"I feel like flood protection should be the number one priority over building infrastructure that will be ruined in a flood," said William Matelski, 33, a Red Hook resident.

Thursday night's meeting was the Economic Development Corporation's second "visioning session" for the BQX, following a heated meeting in Astoria, Queens. The 16 mile track would eventually run from Astoria to Sunset Park in Brooklyn along the waterfront, connecting startup hubs like Long Island City and the Brooklyn Navy Yard, as well as new waterfront residential developments and several large NYCHA housing projects.

City officials predict that the project will cost $30 million annually to maintain, on top of construction. Meanwhile, funding for Governor Cuomo's post-Sandy Red Hook flood management system, initially earmarked at $200 million, was recently slashed in half. A feasibility study isn't due until October.

Matelski lived in Red Hook during Hurricanes Irene and Sandy. "I just think it's kind of foolish spending all this money building this system when it's at risk," he said. 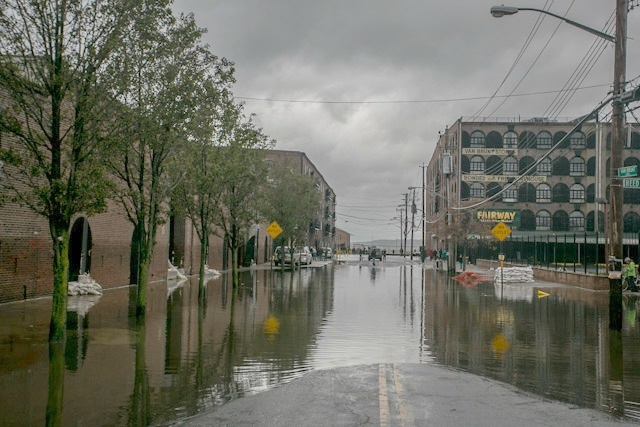 Seperated from the rest of the borough by the Brooklyn Queens Expressway, Red Hook residents have long advocated for better public transit. Two thirds commute by bus or train, and their options are sparse: the crowded B61 and B57 buses, or the Ikea shuttle, which runs to the Smith-9th Street subway station. Walking to the train from central Red Hook takes a good 20 minutes.

Historically, the city hasn't done much to improve the situation. "We go [to the city] and say what we need, transportation is always on that list, and then nothing happens," said Jill Eisenhard, executive director of the Red Hook Initiative.

The closest high school to the neighborhood is in Sunset Park, potentially a quick shot on the BQX. "Buses are overcrowded, they don't necessarily run on schedule," Eisenhard said. "This is a possible solution."

But some residents countered that more comprehensive bus service is the answer. In 2014, the Department of City Planning endorsed the idea of direct bus service between Manhattan and Red Hook through the Brooklyn Battery Tunnel— something many residents have been advocating for decades.

There are very few two-way streets in and out of Red Hook—Columbia, Clinton, Van Brunt—raising concerns about years of BQX construction traffic (more than a third of Red Hook residents own a car). "There's only three ways in and out of here and they tied up already," said Henrietta Perkins, 70, a resident of the Red Hook Houses. "How are we going to get in and out?"

"The bus options are not perfect, but I really think we should be expanding [those] options because it's cheap and flexible," said 34-year-old Red Hook resident Adrienne McIlvaine. 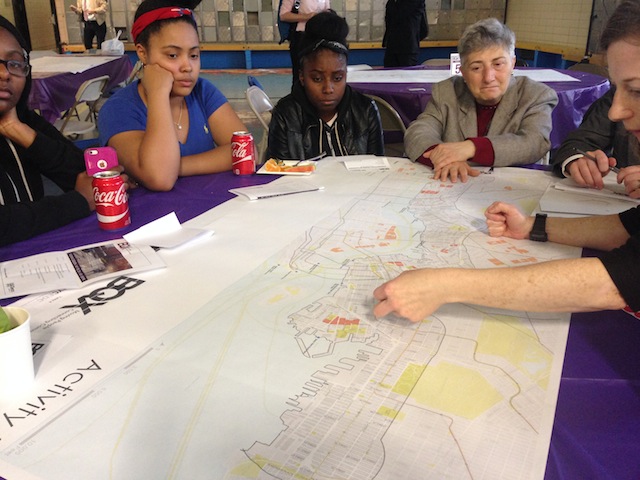 Some residents were also concerned that the streetcar is incompatible with the trucks that frequent Van Brunt Street, the neighborhood's main corridor.

"At least once a week I'll see a backup on Van Brunt because there's an 18-wheeler trying to make a right turn and they can't do it," McIlvaine said.

While the trucks create frustrating traffic jams, they also signify a dwindling industrial economy in New York City—one that the Mayor wants to preserve.

The Department of Transportation conducted a Red Hook streetcar feasibility study in 2011 and ultimately rejected the idea, in large part because the neighborhood's industrial zoning would prevent the mixed residential-commercial development that supports a streetcar.

"If you have this project that's funded by anticipated property tax increases, that means you're going to price out manufacturing that already exists," predicted George Fiala, who owns a shipping company near Fairway Market. "We will end up with a lot of push for residential zoning along the corridor." The Williamsburg waterfront stands as an example.

The EDC countered in a statement that, "The BQX would serve a much larger corridor [than just Red Hook] that has seen significant commercial and residential development in the last five years, leading to higher demand and greater ridership potential."

"New York isn't what it was 50 years ago because it's constantly becoming more convenient and more accessible," said Maya King, who works in the neighborhood. "More expensive, yes, but New York just changes. I don't think there's a way to really stop that." 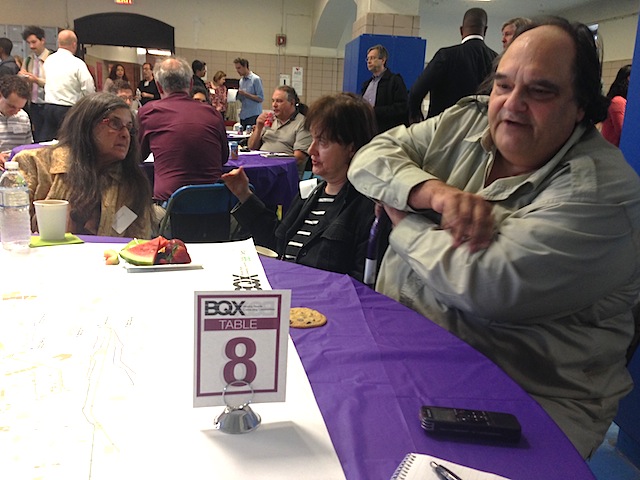 Bob Diamond makes some suggestions for the Mayor to improve his streetcar plan (Emma Whitford / Gothamist).

One of the most enthusiastic pro-BQX voices of the night was Bob Diamond, an MTA guru who for decades has been Red Hook's most vocal and dogged streetcar proponent.

"The neighbors are still complaining from me jumping up and down for joy," he said, recalling the Mayor's BQX announcement in February.

Diamond isn't fazed by his fellow Red Hook residents' concerns. Electric streetcars are emission free, he argues, and don't contribute to global warming; the city could try using water-absorbing pervious concrete, which would address the fact that Red Hook is in the flood plain.

Ultimately, he says, global warming fears can't get in the way of connecting his neighborhood to the rest of the city. "There's a lot of people coming into the area lately and you see them pushing around baby strollers," he said. "The buses aren't going to cut it."

Diamond is adamant that the streetcar of his dreams be carefully integrated into preexisting transit options in the city—a condition that Red Hook riders brought up over and over during the meeting. He also says his neighbors need to be able to swipe a single MetroCard for BQX and MTA (a commitment that the MTA has yet to make).

Diamond whipped his arms around on Thursday, pointing eagerly at possible transit connection points for the BQX, like the latent Triboro Rx plan. "This isn't just a project to benefit a select few on the waterfront," he said optimistically. "This is something I think will eventually penetrate into the neighborhoods."

Hyping the BQX at Pioneer Works in Red Hook earlier this year, Mayor de Blasio described a more contained project. "A lot of people are just going to take this from one point to another without transferring," he said. "This is progress unto itself."

#box
#brookly queens waterfront
#dumbo
#light rail
#mayor de blasio
#red hook
#streetcar
#original
Do you know the scoop? Comment below or Send us a Tip
A new Gothamist is coming! We’ve moved comments over to our beta site. Click here to join the conversation and get a preview of our new website.