Red Hook IKEA Not Such a Nightmare After All 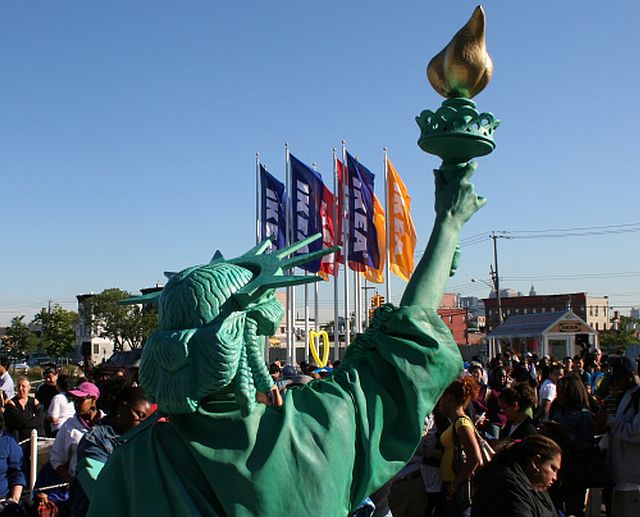 The Times took Red Hook's temperature this weekend, almost two months after the dreaded IKEA -- the first in New York City -- reared its ugly blue head on the Brooklyn waterfront. And contrary to all the hand-wringing, the paper finds that the big box "turned out to be less annoying than people thought." A worker at the Van Brunt Street cafe Baked says, "Everyone was talking about it before. But now, no one talks about it anymore, which is nice. It’s not that big of a deal. It’s just a furniture store.”

Sure, a few dead-enders like John McGettrick, leader of the Red Hook Civic Association, are still in the last throes of outrage, going on about “the environmental and economic costs" outweighing the benefits, but even the haters can't resist that free Water Taxi service! And don't forget that waterfront esplanade that IKEA built, where children frolic barefoot and feast on IKEA's fifty cent hot dogs and unlimited beverages. Even the fears about the traffic have turned to be unfounded; the Times reports that "traffic is so light on some days that a rumor started among locals that IKEA was actually turning out to be a customer-starved failure."

Of course, it's not all Swedish meatballs and roses; the Times notes that the public buses have been overcrowded since IKEA's opening, and nobody really knows how many locals have been hired because the company won't release that data. And get the women and children inside because a new fear is spreading among the locals: Another big box is rumored to be eying the lot right next to the Swedish retailer!

#brooklyn
#ikea
#reconsidered
#red hook
#times
#two months
Do you know the scoop? Comment below or Send us a Tip
A new Gothamist is coming! We’ve moved comments over to our beta site. Click here to join the conversation and get a preview of our new website.