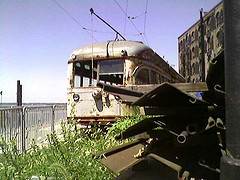 The NY Post reports on the ever-declining neighborhood of Red Hook today, with the area going through some changes that may make some suckers wonder why they just spent $800K on an apartment there. The Brooklyn Paper reported on the neighborhood last month as well, stating it "is in fact turning cold one year after New York’s gentrification guard branded it as The Next Big Thing." Of course, the "gentrification guard" had its eyes on the area for more than a year, in 2004 The Red Hook Gowanus Chamber of Commerce stated, '"It feels like Red Hook is being dismissed as the viable maritime and industrial community that it is. They've determined that its future is as a luxury waterfront community."

So is Red Hook the victim of an over-hyped market, or is it just continuing to be what it's always been: a pretty isolated and hard to get to area? Growth and change like this seem to happen a bit more quickly when the area in question is only one subway stop away. Nevertheless, it seemed a bright future was on the horizon following Barbara Corcoran's $1-million purchase of a building on Van Brunt Street. Just a year later, however, many of the places that make Red Hook a neighborhood are now shutting down: 360, Old Pioneer, Lido Bar, LeNell’s liquor store and venue The Hook are all closing their doors, and the bookstore Freebird is up for sale on Craigslist. And things don't look so good when mainstay bar Sunny’s is only open three nights a week. Can the ballfield vendors be saved at least?

Van Brunt Street is now left with two bars, two upscale restaurants, a wine shop and a bakery. IKEA will be coming to the 'hood soon, and Fairway has already set up shop there - but will more big name chains move in? The idea has residents "bracing for a traffic nightmare in the subway-less 'hood."

UPDATE: There seems to be some confusion on whether or not Lido bar is closing. From the Brooklyn Paper article linked to above, Ariella Cohen writes, "My favorite bookstore, Freebird on nearby Columbia Street, is for sale on Craig’s List, as is another Columbia Street establishment, Lido bar." Some employees have stated otherwise in the comments on this post, however.

Photo of an old streetcar in Red Hook via Mikey 1994's Flickr.