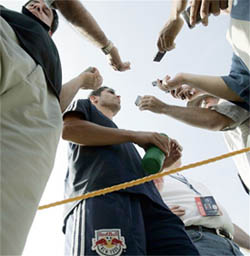 You might not have realized it, but we have a local team playing for a championship tomorrow. The Red Bulls are playing in their first MLS Cup tomorrow afternoon at the Home Depot Center in Carson, CA, when they take on the Columbus Crew at 3:30 on ABC. Ironically, the Red Bulls would not have made the playoffs without the help of the Crew, who beat DC United in the final game of the season.

Two dynamic forwards lead Columbus. Guillermo Barros Schelotto had 19 assists and was just named the league’s MVP while Alejandro Moreno had a team-high nine goals for Columbus. William Hesmer backstops Columbus and allowed a miniscule 1.14 goals per game average, third lowest in the league, this season.

The Red Bulls are one of the more unlikely teams to have made the Cup Finals. New York finished the regular season with a losing record and gave up more goals than they scored. In addition, they saw one of their best players transfer out of the league mid-season and two starters suspended, including their starting goalie. But, they have done enough to get here and with Juan Pablo Angel, they have one of the most dangerous players in the game on their side. The Red Bulls have already beaten the Crew twice this season, can they do so a third time and bring New York another championship?