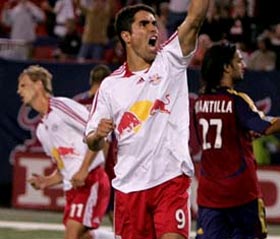 The New York Red Bulls open their season with a lot of questions. The biggest is how long will Jozy Altidore remain with the team? Altidore, who has an impressive blogging gig, is probably going to be the subject of intense bidding among European clubs sometime this summer. Altidore’s departure would put a big dent in the playoff hopes of Juan Carlos Osorio”s squad, but there are other stars who could fill that void.

Juan Pablo Angel scored 19 goals in an abbreviated season last year and will be joined by the newly signed Oscar Echeverry, also from Columbia. Claudio Reyna captains and anchors the midfield, Jon Conway will start in goal (season before last, he led the league in goals against), and Jeff Parke should show improvement this year.

However, the Red Bulls are still a work in progress. Given they have money to spend and the transfer window is open until April 15th, expect them to add some talent before the season really gets going. Today's game against the Columbus Crew begins at 7:30 p.m. and will be televised on the Fox Soccer Channel and Fox Sports en Espanol; with a radio broadcast on WADO 1280 AM [Spanish language].

#jozy altidore
#juan pablo angel
#red bulls
#soccer
#sports
Do you know the scoop? Comment below or Send us a Tip
A new Gothamist is coming! We’ve moved comments over to our beta site. Click here to join the conversation and get a preview of our new website.