Recreational Weed Bill Is Likely Doomed, But The Early Bird Gets The Doobie

One day after the Uruguayan Senate approved a bill to legalize regulated marijuana sales, state Senator Liz Krueger announced her plans for New York State to do the same thing.

Standing with several other legislators on the steps of City Hall, Krueger (D-Manhattan) said it was time to “recognize the fundamental flaw” in marijuana prohibition. Her bill would legalize possession and sale of up to 2 ounces of cannabis, with a $50-an-ounce tax; have the State Liquor Authority license producers, transporters, and sellers; allow individuals to grow up to six plants; and let cities and towns decide whether to ban retail outlets or allow on-premises consumption. Taxing and regulating pot like this, she added, would end racially discriminatory arrests, free law enforcement to concentrate on serious crimes, take the market away from criminals, bring in hundreds of millions of dollars in tax revenues, and stimulate economic development, especially in agricultural areas.

However, the bill is decidedly a long shot in Albany, where a restrictive medical-marijuana measure failed to reach the Senate floor after passing the Assembly earlier this year, as did a bill to decriminalize possession “in public view,” now a misdemeanor. Colorado and Washington, which legalized marijuana sales last year, did so by referendum, not by legislation. Nationally, less than 5 percent of Congress members have endorsed legalization—although recent polls show more than 50 percent of Americans supporting it.

“Elected officials are by definition risk-averse, but they jump on moving buses, and there’s a moving bus on this issue,” Krueger said after the press conference. She says she’s gotten a “very positive response” from both New York City elected officials and farm-country legislators. Another possibility, she adds, is that her legalization bill might encourage the Senate to approve a medical-marijuana law. 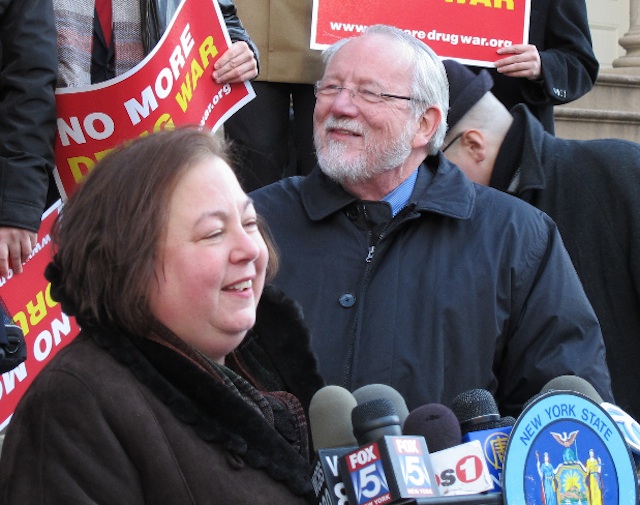 Krueger noted that New York, under Governor Al Smith, repealed its state alcohol-prohibition law in 1923, well before the nation did. Marijuana-legalization advocates often express hope that legislators’ reluctance to end cannabis criminalization will crumble as quickly as their fear of being deemed “soft on drunks” did during the Depression.

When Smith, running for President on a “wet” platform in 1928, got roundly trounced by Herbert Hoover, few would have predicted that Prohibition would ever fall—but on Dec. 5, 1933, barely five years later, the 21st Amendment became law and the celebratory libations flowed freely. (Smith was known to enjoy a cocktail from the State House's stash of legal pre-Prohibition booze.)

Krueger plans to introduce the measure when the legislative session begins next month. Assemblymember Crystal Peoples-Stokes (D-Buffalo) will sponsor an identical bill in the lower house.

Other speakers at the press conference emphasized the racially discriminatory nature of marijuana arrests; of the 40,000 to 50,000 people charged with pot possession in New York City every year, about 85 percent are black or Latino. Former ACLU head Ira Glasser compared it to apartheid, while Shapriece Townsend of VOCAL-NY spoke of losing his job after getting busted last year. Jack Cole of Law Enforcement Against Prohibition noted that most major crimes go unsolved, from 40 percent of murders to 90 percent of burglaries.

“We need to take the long view. This is the first step in a longer debate,” said Sen. Brad Hoylman (D-Manhattan), who added that the gap between public sentiment and legislative action was similar on marriage equality. “We’ll catch up,” he said.

“Very often it happens that an idea takes years to move,” said Assemblymember Richard Gottfried (D-Manhattan), who sponsored the state’s 1977 law reducing the penalty for pot possession to a $100 fine, and has introduced medical-marijuana bills regularly since 1997.

Steven Wishnia is a New York-based journalist and musician, and the editor of Tenant/Inquilino. He is also the author of "When the Drumming Stops," "Exit 25 Utopia," and "The Cannabis Companion." His previous work for Gothamist includes "Why The Push To Abolish Rent Control Is Stupid And Irresponsible"