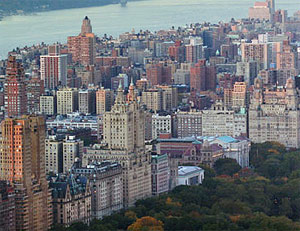 If the Manhattan real estate market is still a bubble, then it's a bubble with unbelievable staying power. The Sun reports that second quarter real estate data reveals that the average Manhattan apartment sells for $1.3 million (a record-high according to three of four real estate firms). The median sales price of a Manhattan apartment is another record: $895,000. And the commercial side is also very strong, with foreign buyers opting to buy buildings and apartments with the weak dollar.

Sales of co-ops have slipped, but that may be due to the many requirements boards have, not to mention the age of some buildings. Which has resulted in condo prices edging up 28%, whereas co-ops prices have dropped 10%; average condo price is $1.49 million while average co-op price is $1.13 million. From the NY Times:

Pamela Liebman, the president of the Corcoran Group, said buyers also prefer the conveniences of new buildings and the perks like concierges who can “stock my refrigerator, get my theater tickets and have my dog groomed.” The dazzle of living in a new building doesn’t hurt either, she said. “New, new, new — all of the foreign buyers love that.”

Dottie Herman, the president of the brokerage Prudential Douglas Elliman, said co-op boards may be forced to change their rules. “I’ve brought buyers that have tons of money, that have tons of assets, and still the co-op boards turn them down for no reason at all,” she said. “I do think that you’re going to see co-ops ease up in some cases. The prices have gone up so much that some of the rules don’t work today.”

What a reversal - snubbing the co-op! Anyway, more nutty news: The average price of a Manhattan studio went up 26%, to $574,197 per Brown Harris Stevens. Real estate appraiser Jonathan Miller summed up picture, "The story nationally is that inventory is climbing, prices are falling, and sales activity is slowing, and really on all three points, it's the opposite picture in Manhattan." As for Brooklyn, Corcoran says average apartment prices have dropped 4% versus last year.