Rebels Without A Metrocard 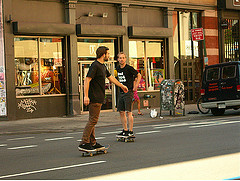 There's a group of guys, younger than Tony Hawk but older than your average skater punk, who refuse to give up their skateboards -- though admittedly they say they have nothing to rebel against anymore. Skateboarding doesn't have to be about rebelling though, sometimes it can just be about...commuting?

Bikers aren't the only ones finding a better way to move around this city, turns out the skateboard is helping grown men get to work -- and possibly hang on to a bit of their youth. The Observer recently tailed around a couple of these guys, one likening his mode of transport a "magic carpet".

Mr. Mahe doesn’t ride to work every day (“Some days it’s all you can do to find your way to the train,” he said), but he has joined a contingent of late–20-something and 30-year-old skateboarders who are riding the concrete waves of New York and Brooklyn on planks of wood atop polyurethane wheels.

There's an entire community of these older skaters and they're not trying to grind down rails anymore or do tricks that may land them in the ER (or on that MTV show Scarred). Most have always skated, so it's an obvious method of trying to get to work...and perhaps they look a little cooler doing it than that guy on the Segway. They're also burning calories and wearing heart-rate monitors -- making cardio edgy! Twice a year they even join in unsanctioned rides: "one in Central Park and another called the Broadway Bomb, during which about 100 mostly adult participants race down Broadway in extra safety gear, including helmets and knee and elbow pads. (They’re not as spritely as they used to be.)"

What's more...the skateboards can go just as fast as bikes, and you don't have to worry about locking it up or getting it stolen. As the caption for the above photo states, "Well, I guess they can keep skateboarding until the first issue of the AARP magazine comes in the mail."