On the eve of the presidential election, four men piled into a cargo van equipped with a powerful light projector and beamed anti-Trump messages onto buildings across midtown Manhattan, earning applause, NYPD reproach, and a spontaneous counter-protest from dozens of Trump supporters. With less than a full day remaining, this election has finally gone Kanye.

The guerrilla light displays began shortly after 8 p.m. as Kyle Depew, Chris Rogy, Grayson Earle and Daniel Latorre parked on Fifth Avenue directly in front of Trump Tower. With Depew at the wheel and Earle controlling video software on a laptop, Rogy rotated a turreted home theater projector until paragraphs of text could be seen scrolling upwards, Star Wars-style, music included, on a Prada store facade directly across from Trump Tower. The text was a call for strong voter turnout in hopes of defeating "Darth Trump," despite the leftist group's anxieties over "Emperor Clinton." That message was followed by the projection of a simpler rallying cry: "GRAB HIM BY THE BALLOT."

The full text of the scrolling message read as follows:

It is a perilous time for the Left.

In an effort to escape the clutches of Darth Trump, concerned citizens of the Republic are rallying behind the controversial Clinton Dynasty.

Susceptible to Corporate Forces and long time ally to the Dark Suits of Wall Street, the prospective new Emperor Clinton represents a dangerous threat to justice throughout the galaxy.

In an effort to thwart the growing interest of the Dark Side within the Imperial Government, rebels must place increasing pressure on their newly elected leader to enact progressive change.

Multiple Bernie Sanders buttons were visible inside the cargo van, and Depew stressed that the goal of the projections was not specifically in support of Hillary Clinton, but rather a passionate rejection of Trump. A brief poll of the group revealed divisions: some planned to begrudgingly vote for Clinton, while others resolved to vote Green, despite being dissatisfied with the party's nominee, Jill Stein.

"I don't feel wholeheartedly behind Stein, but the federal funding is important," Depew Said.

All four men have ties to The Illuminator, an art collective that coalesced during the heyday of Occupy Wall Street and was involved in the projection of a giant "99%" onto the side of Manhattan's Verizon building. "This feels just like old times," Rogy said Monday night. "Like back when we'd ride around and throw up the bat signal. That's what we're doing now."

"A place-based occupation is all about gathering people into a single place," Latorre said, as pedestrians on Fifth Avenue stopped to snap photos and shoot video. Latorre had only first heard of the plan to project the anti-Trump message three hours earlier. 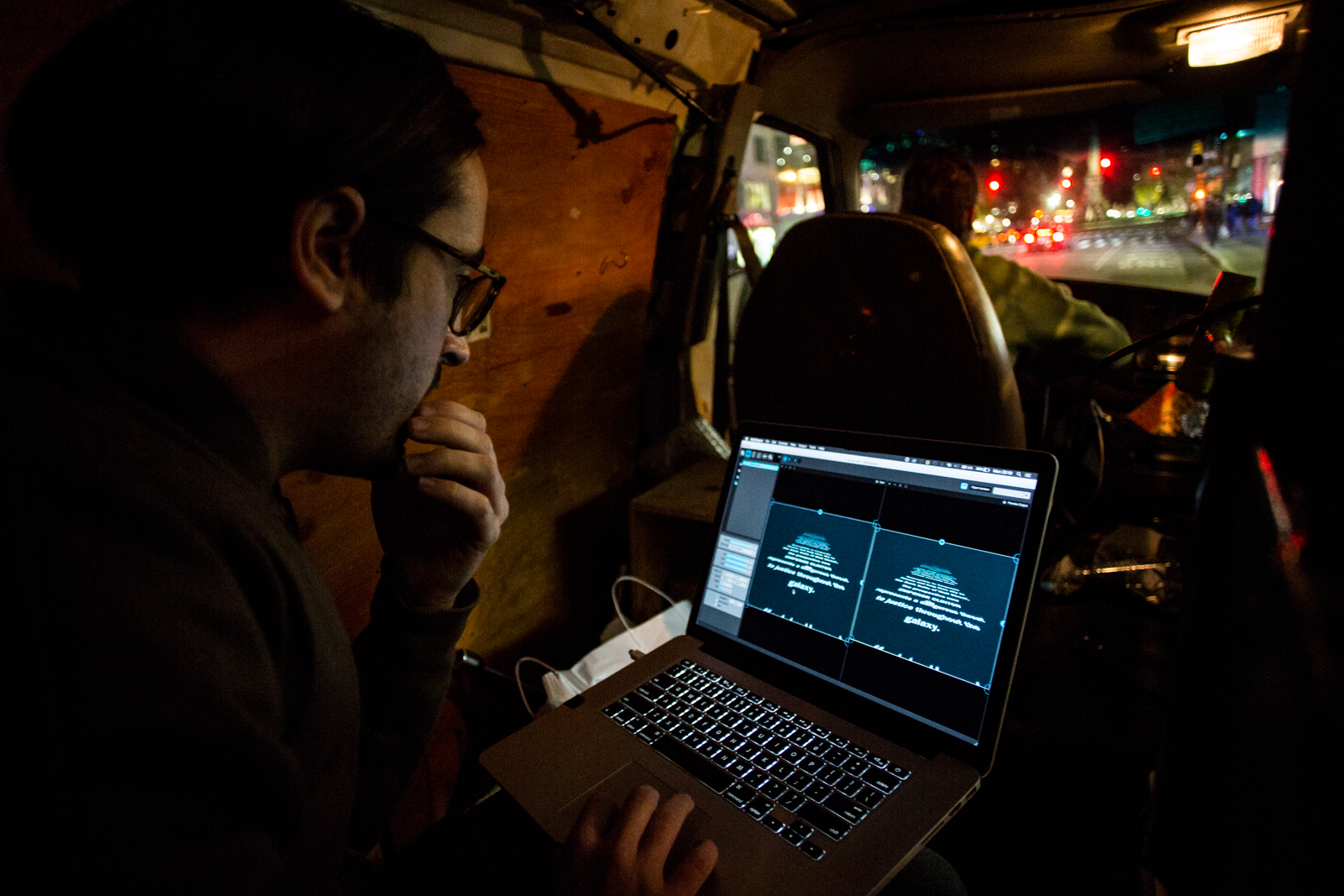 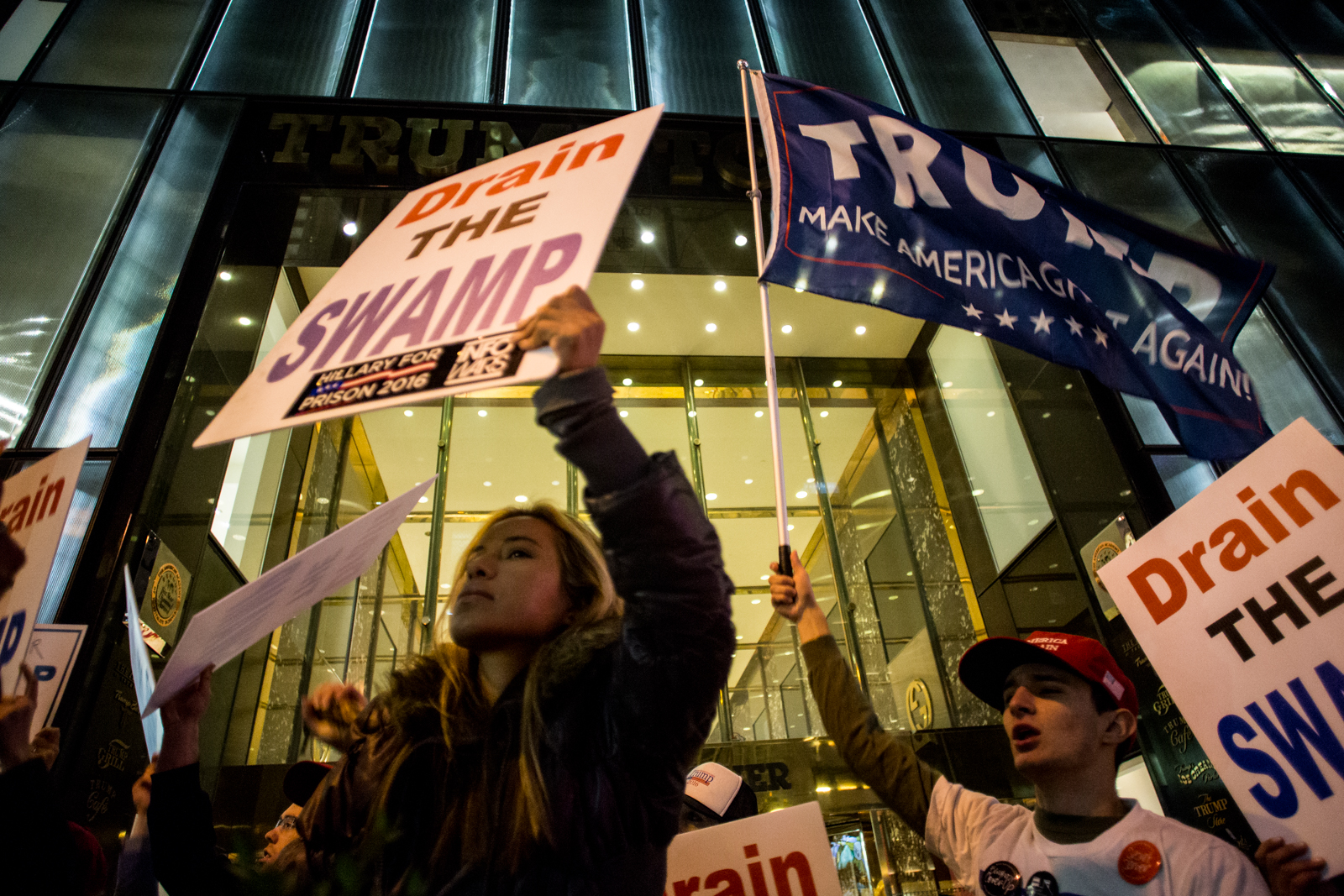 A small group of supporters rallied outside Trump Tower Monday. Upon seeing the anti-Trump projections, many began chanting "Make it stop!" at nearby police. (Scott Heins/Gothamist)

While projecting "GRAB HIM BY THE BALLOT" onto the Tiffany & Co beside Trump Tower, a small group of Trump supporters gathered and began chanting "Make it stop! Make it stop!" Approached by a group of NYPD officers demanding a permit, the illumination bandits agreed to shut down and move along.

The projection reappeared nearby at Columbus Circle, where Depew and Rogy quickly focused the beamed critiques of Trump onto 2 Columbus Circle. Minutes passed and the four men cheered and snapped photos with their phones as the Darth Trump/Emporer Clinton message replayed multiple times. Once again, the NYPD eventually demanded they either produce a permit or pack up and move along. 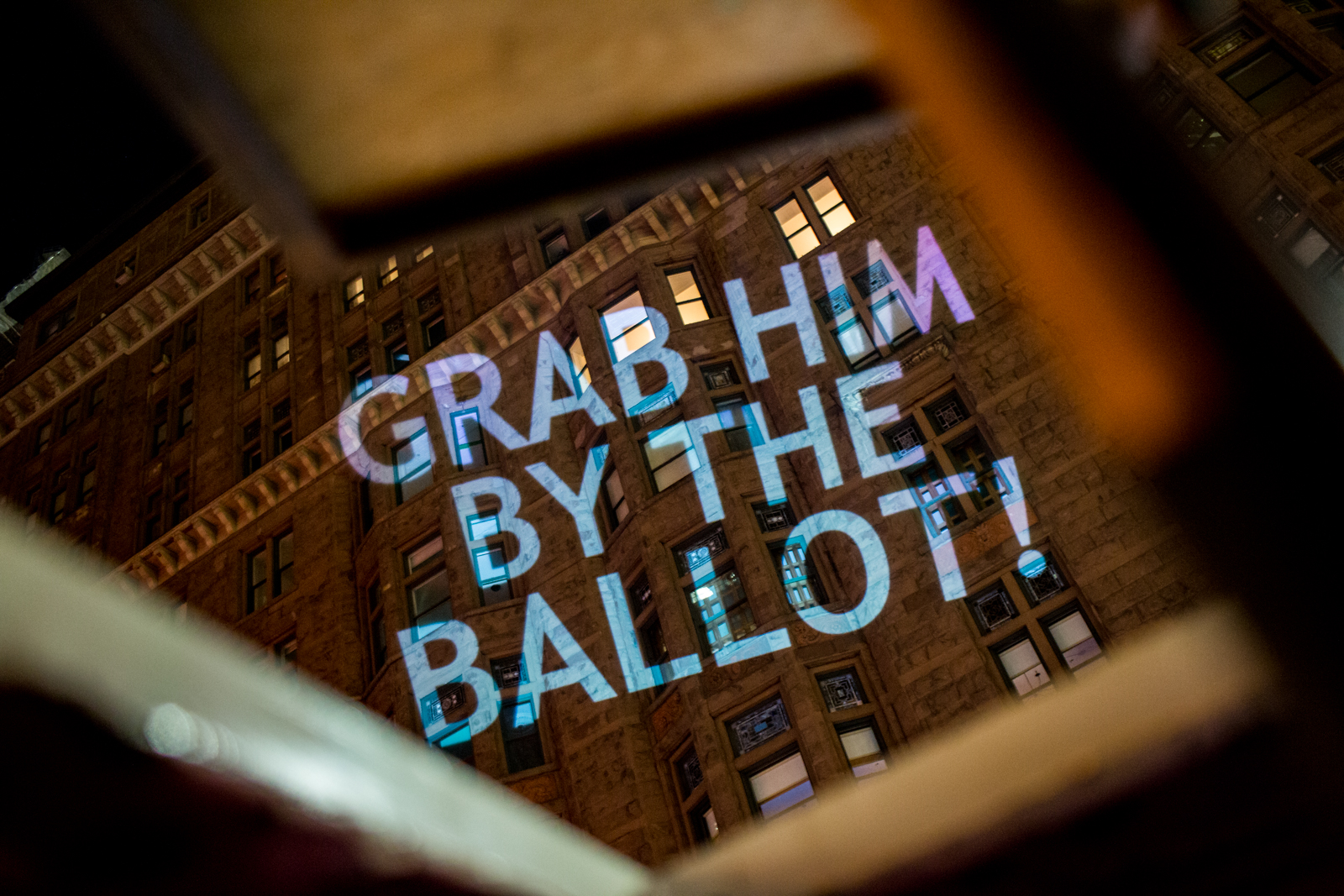 "The election is creating a lot of work for us," Rogy said just before the group pulled over and began projecting onto the side of Carnegie Hall, where a lack of police presence offered the projectionists a breather. "I feel like we're going to be going out even more. There's so many issues for us to talk about now, and we have to hold her feet to the fire. It's going to be easier to pressure her than Trump," Rogy said.

#bernie sanders
#donald trump
#election 2016
#hillary clinton
#Projections
#street art
#The illuminator
Do you know the scoop? Comment below or Send us a Tip