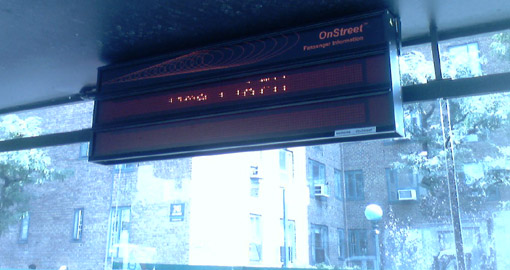 Ooh, Streetsblog glimpses what seems to be the first real-time information board at a bus shelter! Apparently the board was being installed at an M15 shelter at First and East 14th. Streetsblog also has some video and ruefully notes, "Unfortunately, for now it appears that the new displays can only be read and understood by bus riders fluent in Klingon." Well, it's only fitting that the board display the equivalent of garbled PA messages. Update: It turns out the messages are displaying smoothly/correctly (but it just couldn't be captured by cameraphone). Still, we'll expect some hiccups (the MTA is only...the MTA, right?).

For those of you who are keeping track, the MTA was looking into testing this technology on a few lines - the M15, M31, M35, M57, M66, M72 and M116 - starting back in June of 2005. The MTA has long been interested in using satellite tracking to let customers know when buses are coming, but in previous studies, the skyscrapers interfered!

And earlier this year, the MTA started to install real-time information boards at some subway stations.

#bus
#MTA
#subway
#technology
#The MTA
#video
Do you know the scoop? Comment below or Send us a Tip