Ready For Personalized Street Ads That Track Your Smartphone?

Bombproof recycling bins installed throughout London before the 2012 Olympics feature internet-connected digital screens that advertisers can purchase time on (and the city can use for PSA announcements). We have something similar here in NYC, with digital ads inside and outside subways, for instance. But what's new in London is that a startup company called Renew is now experimenting with using WiFi to track passersby through their smartphones, with the ultimate goal of targeting individuals with personalized commercials. Yes, just like Minority Report. Quartz reports:

The bins record a unique identification number, known as a MAC address, for any nearby phones and other devices that have Wi-Fi turned on. That allows Renew to identify if the person walking by is the same one from yesterday, even her specific route down the street and how fast she is walking.

The technology, developed by London-based Presence Aware, is supposed to help advertisers hone their marketing campaigns. Say a coffee chain wanted to win customers from a rival. If it had the same tracking devices in its stores, it could tell whether you’re already loyal to the brand and tailor its ads on the recycling bins accordingly. ”Why not Pret?” the screen might say to you. Over time, the bins could also tell whether you’ve altered your habits. 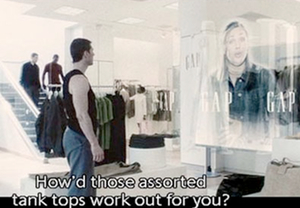 "Pretty fucking great, thanks for asking!"

Of course, there are some, ahem, issues regarding privacy. A company called—perfectly—Presence Orb, is the one handling the "analytics and reporting" for Renew, and they have graciously provided an "opt-out" option for those who don't want to be tracked, labeled, and targeted. ("Although we will be sad to see you go we believe this is every device owners [sic] right," Presence Orb says, with a single tear rolling down the Orb.

But as Gigaom points out, the bins are collecting personal data, and UK data protection law requires companies to get the user’s permission before capturing such data:

But how do you inform someone that their smartphone’s unique identifier is being logged as they walk past an innocuous recycling bin? You can’t, unless those ad screens are taken up with warning messages. And as for people knowing where to find the opt-out form, well, let’s be realistic: that also isn’t going to happen unless they’re reading coverage of what’s going on.

Privacy shmivacy. If the pilot program proves successful in London, Renew plans to expand to other markets, including NYC. Sure, you could just opt out of this by turning off your phone's Wi-Fi every time you step outside, but are you really going to remember to do that every time? They'll get your MAC address sooner or later, and then you're IN THE SYSTEM, just like Jeff Bridges getting sucked into Tron, or the dystopian Sci-Fi nightmare of your choice.

"The chances are, if we don’t see you on the first, second, or third day, we’ll eventually capture you," Renew CEO Kaveh Memari ominously promises Quartz. "We just need you to have it on once." Resistance is futile. Can we just cut to the chase and start getting RFID chips implanted at birth?

#advertising
#minority report
#orwell
#philip k dick
Do you know the scoop? Comment below or Send us a Tip