A couple of good Samaritans were honored by top NYPD brass yesterday for their work stopping a man charged with groping young girls around Park Slope.

Mahdhi Whareed, 22, and Lawrence Abdullah, 40, were going to grab some food in on 5th Avenue near 9th Street on Monday when the pair heard a woman screaming "Get him!"—a cry made in reference to a man who had just knocked her to the ground and was sprinting away. Neither Whareed nor Abdullah knew it at the time, but the woman shouting was actually an undercover detective attempting to stop a man who resembled a suspect wanted in a string of sexual assault cases that have plagued the area since June. The two men, assuming that the assailant had stolen something, sprinted after him, chasing the suspect for blocks and eventually enlisting the help of a cyclist to corner him.

Six blocks later, the three had gathered around the suspect—later identified as 34-year-old Jesse Dailey— who attempted to justify himself by saying that the woman had been trying to take his I.D.—an explanation that didn't sit well with Abdullah. Dailey insisted, however, that he didn't want any trouble, and allowed Abdullah to look at, and subsequently, snap a photo of his driver's license. 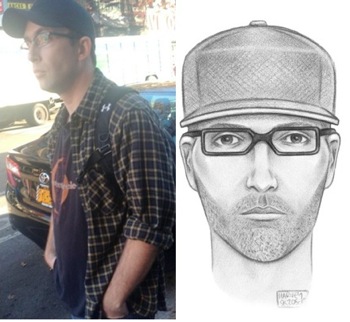 The NYPD released a photo and sketch of the groping suspect

The next day, Abdullah's wife noticed Dailey's photo plastered all over the news, and the pair realized that the man he'd stopped the day before was the same man wanted for sexually assaulting girls in the area. Abdullah, who has a 1-year-old daughter, wasted no time getting to the 78th Precinct. Dailey was arrested at his home shortly thereafter. He's been charged with assaulting a police officer, two counts of sexual abuse, two counts of forcible touching, and three counts of endangering the welfare of a child.

Dailey has denied any wrongdoing, asserting that he only ran from the officer because she failed to identify herself as a cop, DNAinfo reports. "He thought he was being assaulted by some random scary woman," Dailey's lawyer, Matthew Galluzzo, told the news site. "He shrugged her off and ran."

Nevertheless, Police Commissioner Ray Kelly applauded the men who chased down a suspect they thought was up to no good.

"Their quick response and quick thinking are what make New Yorkers proud. They're good neighbors and they're good Samaritans," he said at Friday's press conference before handing each man a plaque, one of which unfortunately botched the spelling of Mahdhi Whareed's name. It's the thought that counts, though!

Abdullah, for his part, said he'd do it again in a heartbeat, and at no point considered giving up the pursuit.

"I was tired, I was out of breath and I was saying to myself 'You need to go to the gym,'" he told reporters. "That's the only time I was a little selfish."