Ratner Vows to Break Ground on Atlantic Yards in December 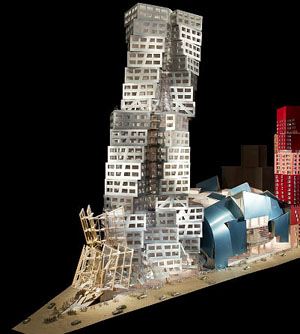 That plucky developer Bruce Ratner is still rallying for his $4 billion plan to turn the MTA rail yards in downtown Brooklyn into a sports arena, office and residential complex designed by Frank Gehry! Despite staunch opposition to the project's scale and use of eminent domain by the state, Ratner is promising to break ground on the project in December.

The Times speculates that his latest surge may be explained by his time-sensitive naming rights contract with Barclays Bank, which has agreed to pay $20 million a year to be attached to the arena. But the deal requires Forest City to secure the land and the financing by the end of November.

The Times also learns that because of the tanking bond market and rising construction costs, Ratner has recently asked "government officials" for as much as $100 million in additional cash for the project. (That's on top of the $300 million in subsidies and tens of millions in tax breaks already promised from the city and state.) Ratner is also counting on a favorable ruling from the Treasury Department that would let him use tax-exempt bonds to finance the arena.

If that doesn't happen, what would already be the most expensive arena in the world would get significantly more costly. But there's no indication that Ranter can expect the Treasury Department to rule any time soon; for over two years Treasury officials have been weighing regulations proposed by the IRS that would make it almost impossible for tax-exempt bonds to be used for private sports teams.

All in all, the article is a study in contrasts, with the obstacles facing Ratner seemingly more insurmountable than ever, especially given the tanking economy. Yet the developer seems to be projecting Rumsfeldian confidence, and his spokesman declares, “While it is a tough market, we have secured more than $1.5 billion in construction loans this year so far. And this is the most exciting project in the country and the most exciting arena in the world.” Not so excited, naturally, are community opponents led by Daniel Goldstein from Develop Don’t Destroy Brooklyn: “There’s no way they’ll get control of the land they need, get the financing, end the litigation and break ground by December."