Rangel Will Give Up One Rent-Stabilized Apartment 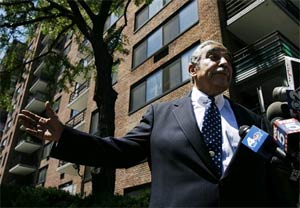 After the revelation that he rents at least three rent-stabilized apartments (one unit is made up of two previously combined units) and ensuing uproar, Representative Charles Rangel will give up a 10th floor one-bedroom unit at Harlem's Lenox Terrace that he used as an office.

The NY Times first reported Rangel's real estate riches last Thurday, and Rangel defended his actions as being legal. However, rent regulations require that, per the Times, "rent-stabilized apartments to be used solely as a primary residence." What's more, the owner of Rangel's building, the Olnick organization, typically ousts rent-stabilized tenants in favor of market-rate ones, making Rangel's ability to keep a number of rent-stabilized units all the more incredible.

The apartment Rangel is giving up is a one-bedroom that would usually rent for at least $1,700, and Rangel was splitting the rent-stabilized $630 cost between himself and his re-election campaign. His spokesman only said, "Mr. Rangel has indicated that he is not willing to say any more."

There are calls for inquiries into Rangel's rental situation, after different groups have questioned whether the difference between rent-stabilized and market-rate rents would constitute a gift.

#charles rangel
#Lenox Terrace
#rent
#rent-stabilized
Do you know the scoop? Comment below or Send us a Tip