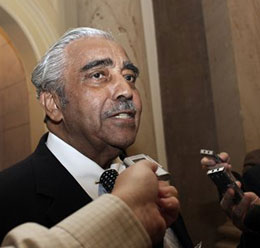 While the House of Representatives voted against a measure to strip Representative Charles Rangel of chairing the House Ways and Means Committee, House leaders are planning an investigation of Rangel's ethical issues--you know, the lack of reporting income on his returns, his rent-stabilized apartments, using House letterhead to solicit donations for a center being built in his name. This comes as his 1972 Mercedes Benz, long unused, was towed from a House parking garage!

Yesterday the Post reported that the Benz was covered by a tarp (its NY State registration expired in 2004) and had been there for years. The Post found "House rules forbid use of the garage for long-term storage more than 45 days," and suggests that the free space should have been reported as "imputed income." Rangel only said, "I told you I am not discussing that. I want to be kind and gentle -- please let me be." But he also wrote an open letter, "blaming Republicans and the media" for his troubles.

The NY Times reports that Rangel chose to "ride out the storm" and not cede his chairmanship because there are other House Republicans--under actual criminal investigations--who haven't resigned as chairs of their committees. The Washington Post has an amusing roundup of the corrupt/allegedly corrupt who voted for and against Rangel losing his chairmanship.

#car
#chairmanship
#charles rangel
#ethics
#house of representatives
#income taxes
#tax return
Do you know the scoop? Comment below or Send us a Tip