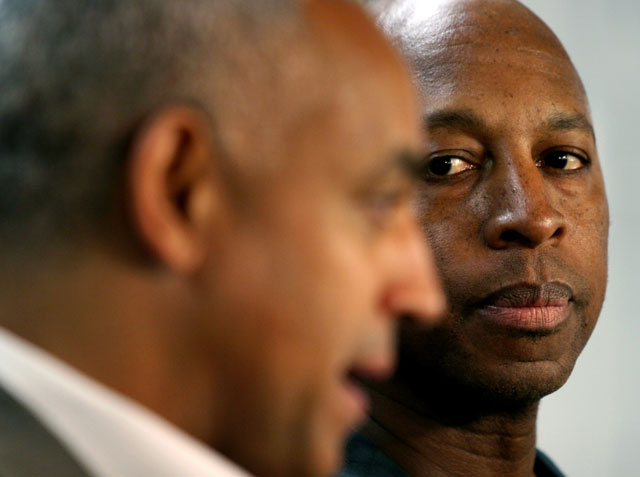 Photo of Omar Minaya and Willie Randolph from October 2, 2007 when it was announced that Randolph would continue as the Mets manager in 2008 by AP/Craig Ruttle

After firing Willie Randolph following last night's game against the Angels, Mets general manager Omar Minaya finally met with the media today. During the press conference this afternoon, Minaya said the decision to relieve Randolph of his coaching duties "was my decision and it was a tough decision," not that of any others in the organization and it was based on the performance of the team in the past year. It was a move that Minaya did not make easily, saying that as the first Hispanic general manager in baseball who hired the first African American manager in New York baseball history, the two "shared a bond."

The Mets, who entered the season as a favorite to win the NL East (if not one to win the World Series) sit in 4th place in the NL East, with a 34-35 record and 6.5 games behind the Phillies. While Minaya said that the team was underperforming, he didn't just lay the blame on Willie Randolph, but the players and himself as well.

When asked why he didn't fire Randolph last week or over the weekend, Minaya said that he only reached the decision after sleeping on it Sunday night. After making his decision, and taking care of logistical matters for replacing Randolph, Minaya took the first available flight to California to inform Randolph of his decision in person. The media speculation over the weekend on Randolph's job is what eventually forced Minaya's hand, "Those sources revealed my thinking, but not my decision." Minaya said the firing came after the game in the team hotel (and announced in the wee hours of the morning in the East coast) because he didn't want Randolph to hear that he was fired from a 3rd party and it would be disrespectful if Randolph was still in uniform. He also said that the two had discussed Randolph's job situation before and Minaya promised to let him know as soon as he made a decision.

Earlier today, Willie Randolph said that he was stunned by the decision to fire him. In the lobby of the team hotel, Randolph apologized to the fans before saying that he was "ready to move on."

#baseball
#mets
#Omar Minaya
#sports
#willie randolph
Do you know the scoop? Comment below or Send us a Tip