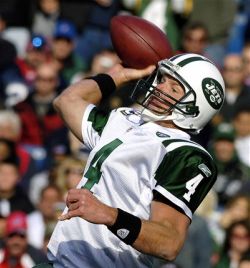 Playing in the AFC East was once thought to be tough. But New England's Tom Brady out for the year and the NFL's schedule rotation has the division against the two weakest in football -- the NFC and AFC West. That makes things a lot easier. As Bill Simmons said, the NFL did everything for the AFC East except schedule Columbia and Georgetown. The Jets' last easy game for a while comes Sunday against St. Louis, which will be without its talented tailback, Steven Jackson. After that, it's off to New England and then Tennessee before facing Denver at home.

The Jets come into this game following an ugly but effective win against Buffalo last week. Only one part of the team deserves perfect marks for that game, and that's the rush defense. Brett Favre threw one of his trademark interceptions -- "Oh, I'm going to get sacked, but heaving a ball downfield seems like a good idea!" -- and the game wasn't over until late. Thomas Jones had a decent but not great game on the ground.

Against the Rams, look for the shackles to come off Favre. He has been a game manager thus far. And with his league-leading 12 picks, he hasn't done that all that well -- but there is only so long you can try to teach an old dog new tricks. The Jets should try to get more reward out of their quarterback since they are still getting all the risk. With a St. Louis defense that can't stop anyone's attack, this Sunday's game is the perfect game to try it. And don't buy into the trap-game talk with a Thursday game in New England looming next week.

#brett favre
#football
#jets
#sports
Do you know the scoop? Comment below or Send us a Tip