Several hundred people gathered at Foley Square on Thursday night to call for the firing of the NYPD officers involved in the death of Bronx man Ramarley Graham, five years after he was fatally shot by police in his Bronx apartment.

The rally featured speeches, poems, songs, and chants led by Graham's mother, Constance Malcolm, the mothers of three other men and boys killed by NYPD officers, and Black Lives Matter activists. Speakers reiterated the Graham family's call for accountability for the officer who killed Graham, Richard Haste, as well as a dozen other officers who were present at the scene of the shooting or responded to it, and called for broader accountability within the NYPD.

"How many black and brown boys and girls will we lose to the hands of state violence, negligence, abuse and misconduct before justice is served?" Brandon, a youth leader with Make the Road New York, asked the crowd. "Every 28 hours in this country we lose another Ramarley, another Eric Garner, another Sean Bell."

Haste's week-long disciplinary trial ended on January 23rd. The decision as to what, if any, punishment he will receive will be made by Commissioner James P. O'Neill. While NYPD officers' disciplinary records have recently been shielded from public view, the NYPD told Gothamist that they would inform the Graham family of the outcome of the trial.

On the afternoon of February 2nd, 2012, Haste, who was surveilling a Bronx bodega for potential drug activity, observed Graham walk into and out of the store and believed he saw a gun in Graham's waistband. He and two other officers then followed Graham to his apartment, broke down the door, and shot Graham in the bathroom in front of his grandmother and six-year-old brother. Investigators never recovered a weapon from the scene.

Haste was indicted by a Bronx grand jury on charges of manslaughter, but the case was dismissed in 2013 due to a technicality. A second grand jury declined to indict Haste, citing insufficient evidence, and, in March 2016, federal prosecutors declined to pursue criminal charges.

Haste has been on desk duty since the shooting, and his salary, records show, has increased $30,000 since 2012. In 2015, the city settled a wrongful-death lawsuit with Graham's family for $3.9 million.

Malcolm argued in a New York Times op-ed published Thursday that the lack of accountability for police officers and departments who kill or engage in abuse is the greatest obstacle to police reform nationwide. 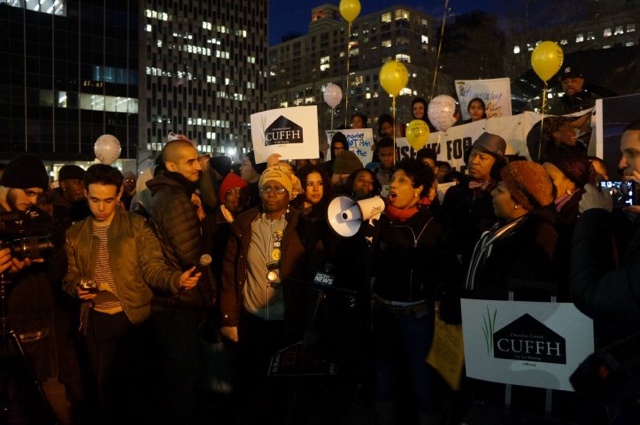 She placed blame for the lack of police accountability in her son's case on Mayor Bill de Blasio, writing that he "exploits the rhetoric of social justice but is unwilling to make the changes to achieve it."

Several other speakers echoed criticism of de Blasio and expressed frustration that he and O'Neill have not met with Graham family.

Gwen Carr, the mother of Eric Garner, urged supporters to continue pushing for accountability within the NYPD. "Only we can make change, they're not going to change it for us," she said. "We know that justice is not free. We know that freedom is not free. We have to fight for it and that's why we're here."

Al Barrentine, a Texas native who lives in Brooklyn, told Gothamist he believes the frequency of cases like Graham's should not dampen the urgency of protesting. "As much as we've seen this a million times before, we have to keep marching, keep fighting the fight," he said.

Sharona Gails and Keisha Orr-Hudsony said they had come to the rally to support the cause of Graham's family, but also for personal reasons. Gails's 26-year-old son, Brian Wilson Jr., has been missing since December 26th, 2016. The women are advocating for more transparency and accountability in the NYPD's interactions with the families of victims of crime or tragedy.

"What breaks our heart is just the constant reminder of the lack of concern for the family, not sharing information, withholding information, and just the pure disregard for life," Orr-Hudson told Gothamist.

Malcolm and several activists also tied the rally to larger calls for resistance against the Trump administration, aligning their fight with that of Muslim and immigrant communities affected by Trump's recent executive order.

"This country was built on immigrants, so we have to stand with these people and let them know we have their backs," Malcolm, who is originally from Jamaica, told the crowd, adding that she and her supporters stand in solidarity with the NYC bodegas—many operated by Yemeni-Americans—that closed on Thursday to protest the executive order.

"We must resist, we must stand up, and we must speak loudly and show up for one another," civil rights activist and Women's March on Washington organizer Tamika Mallory said. "Even if it's not your issue, show up, because it will be your issue in due time."

#nypd
#police involved shooting
#protest
#rally
#ramarley graham
#richard haste
#original
Do you know the scoop? Comment below or Send us a Tip