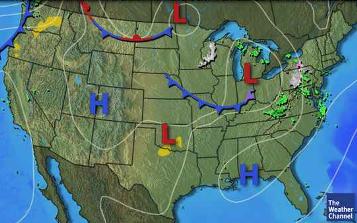 Lots of classic textbook weather action should occur today and tonight. An Alberta Clipper, currently centered over Toledo, is zipping southeastward and will be off the Mid-Atlantic coast by tonight. We won't be much affected by the Clipper itself, as it will travel a fair distance south of the city, but there's a good chance we will get caught up with what happens next.

What should happen next is what guys in plaid oxford shirts, advanced degrees, and poor social skills call baroclinicity. As the cooler air behind the Clipper passes over the warmer waters of the Gulf Stream the temperature and pressure patterns, which were geographically aligned, will go out of whack. When those patterns get misaligned the atmosphere scrambles to regain order by spinning around and lifting upwards. Spinning around and rising also has a geeky technical term, cyclogenesis, which just means a new low pressure system will form. The new storm is expected to move northward and bring us rain tonight.

Before the rain hits, this afternoon should be cloudy with a few sprinkles. More substantial rain should hold off until later tonight. Like last weekend, the bulk of the storm will be east of the city, so we may avoid much of the rain. The rain, should it occur, will be heaviest at night and will taper off through the morning hours tomorrow. Highs today and tomorrow will be around 47, or ten degrees cooler than normal. Skies should clear by Sunday. Highs Sunday and Monday are expected to be in the lower-50s.