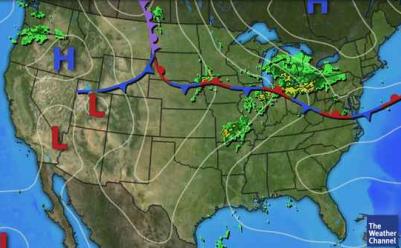 Hurricane Dean continues to gain strength as it heads toward the Yucatán peninsula. The hurricane, with sustained winds of 150 miles an hour, may intensify to a category 5 storm before it hits land tomorrow. Dean is currently expected to cross the Yucatán near the Mexico-Belize border, where it will weaken, then regain strength over the Bay of Campeche before slamming into northern Mexico. The storm passed a hundred miles south of Jamaica and the Cayman Islands, with neither country adding to the storm's death toll of eight people across the Caribbean.

Locally, what will be bringing us rain tonight are the remnants of short-lived Tropical Storm Erin. Erin, you may recall, reached tropical storm strength for only a day before coming ashore in Texas. The storm has wandered northward and dumped a foot of rain on parts of Minnesota and Wisconsin yesterday. The resulting flooding has killed at least 13 people.

As has often been the case this summer, a stationary front stretches across the country to the east coast. We're on the south side of the front today, which is why we're so chilly. The bundle of energy that was Erin is moving eastward along the frontal boundary and will be here tonight. We may squeeze in a couple of hours of sunshine early this afternoon, but clouds, drizzle and rain will soon be upon us. The high might not break 70. Rain should be steady after midnight but it doesn't appear to be of subway-stopping intensity.

Tomorrow remains chilly as the rain and drizzle will probably hang on through Tuesday evening. Wednesday should be a big improvement and warm air returns on Thursday.

Morning surface weather with stationary front and blob of rainy weather headed our way from weather.com.

#As
#death
#health
#hurricane
#Hurricane Dean
#joe schumacher
#minnesota
#people
#rain
#south side
#storm
#subway
#texas
#weather
#Wednesday
Do you know the scoop? Comment below or Send us a Tip