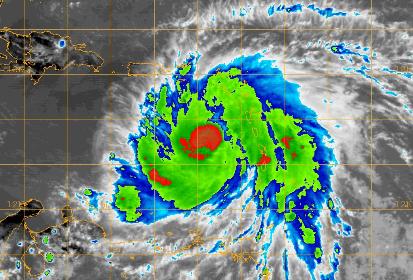 This afternoon's temperature has been bouncing up and down as the sun struggles to come out behind the cruddy clouds. This morning's clouds were leftover from a bit of convective activity to our south last night. A line of showers is approaching the city from the west. Some of those showers may be intense, as they hit the city later this afternoon and into the evening.

A high pressure system behind today's cold front will dominate the weather this weekend, bringing us cool, dry conditions. Tomorrow is looking sunny, with a high in the mid-70s. Cooler still on Sunday and a couple of clouds may show their face. Bring a blanket if you are a yahoo that gets drunk on a North Fork winery tour and passes out in the vineyard. Temperatures on eastern Long Island may dip into the 40s Saturday night. It won't be nearly that cool in the city.

Lots of extreme weather happening around the world this week. Yesterday was the warmest day ever recorded in Japan. Two locations warmed up to at least 105 Fahrenheit. The current heat wave has killed at least 12 people and at least 56 people have died from the heat this month. Flooding in South Asia has claimed the lives of upwards of 2800 people, mostly in India, Bangladesh and Nepal. Meanwhile, Dean has intensified to a category 2 hurricane after striking Martinique. By this time tomorrow it is expected be even stronger as it heads toward Jamaica.

Infrared satellite image of Hurricane Dean, and the world's longest URL, from the Naval Research Laboratory.