Rains May Have Contributed To Brooklyn Building Collapse

Yesterday's complete collapse of a four-story building in the Clinton Hill section of Brooklyn was somewhat of a miracle: Only four people had minor injuries, while firefighters, who arrived after reports of falling bricks, were still standing outside 493 Myrtle Avenue right before the collapse. City Councilwoman Letitia James told the NY Times, "If any of the men had gone in, it would have been a Father’s Day disaster." A witness from the corner described the collapse to the Daily News, "It started coming from the side, like dust. Then ... the whole thing just fell. It fell like in layers, one, two, three." 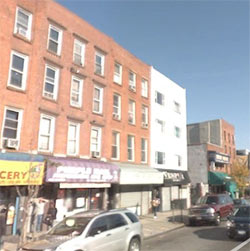 From Google Street View: 493 Myrtle Avenue was the white building

Residents of the building, between Hall and Ryerson Streets, were shaken, as were their neighbors. One 493 Myrtle tenant Anh Nguyen told the Post he had let the building to go skating and came back to find it gone, "I lost everything. But it's just material stuff. Lucky for me I was going out skating." At 491 Myrtle Avenue, Sheila Nunez said her bedroom wall was completely gone, "I told the kids to run," while her husband Jose told the Times, "You couldn’t see anything. Everything was full of smoke." Their 10-year-old daughter was momentarily trapped on the ground floor, but firefighters were able to get her out—she only had scratches on her arms. Unfortunately for the Nunezes and other 491 Myrtle residents, their building will have to be razed.

The buiding's owner William Sang had been cited or a crack in an exterior wall last month; the building was apparently undergoing repairs for the one-half inch to inch wide crack that ran from the first to third floor. Sang told the Times that he was given time to fix the crack—which he says had been there for 10 years (he's owned 493 Myrtle since 2006)—and that the Department of Buildings told him, "There was a crack but that it was O.K. to have tenants.” To the Post, Sang blamed the work being done on a neighboring building, while investigators suspect that the heavy rain may have also contributed to the situation.

A neighbor told the Post the building was very unstable, "The building has been shaking... for past six months. If you sat in my living room next door the building used to shake. You know like a miniature earthquake. I guess it shook until it fell. Every few minutes it used to shake."

#493 Myrtle Avenue
#brooklyn
#building collapse
#myrtle avenue
#Vesper Bar and Lounge
Do you know the scoop? Comment below or Send us a Tip