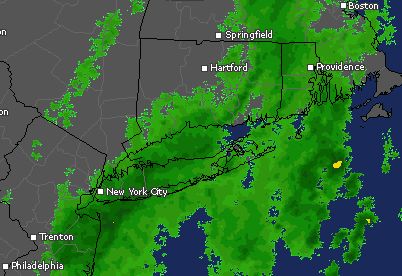 There's a couple more hours of showers in store for today but the sky should clear up by early this afternoon. Sunshine this afternoon should give the last full day of spring a high temperature of around 80 degrees. The daylight hours tomorrow should be mostly sunny, leading to a high in the low-80s. A pathetically weak cold front may occasion a few clouds around sunset. The air mass behind the front isn't much cooler, but it is drier. Friday should be all sun with a high also in the low-80s.

The first weekend of summer is looking very seasonable and pleasant. There should be a mix of sun and clouds both Saturday and Sunday with highs around 80 and lows in the lower 60s.

With not much local weather action going on lets look at a bit of behind-the-scenes ugliness. Bill Proenza, the relatively new director of the Miami-based National Hurricane Center has been speaking out about the imminent demise of QuikScat, a satellite whose ocean surface wind measurements are used by hurricane forecasters. QuikScat was launched in 1999 with an expected two year lifespan. Currently, there's no chance of a replacement until 2016 at the earliest. Since QuikScat is obviously going to die before then, Proenza has been advocating for a new satellite. His statements have been met by nastygrams from his bosses at NOAA, the Hurricane Center's parent agency, accusing Proenza of causing confusion about NOAA's ability to forecast tropical storms. The letters scolded the Hurricane Center director for not following procedures but did not address his substantive concerns. Proenza has strong support from Florida's congressional delegation so we'll see how this turns out.

Local radar showing rain skirting the western edge of the city from AccuWeather.com.