Have you been enjoying this sudden respite from life as a human sweat towel? Finding it pleasant to step outside and be wet from rain, rather than from steaming humidity? Would you be quite happy to live in this moment forever? If so, The Weather has cooked up a gnarly concoction of rainy delights, especially for you.

Most of the storm coverage you've seen today likely revolves around Florence, a category 4 hurricane currently hurtling toward the eastern seaboard "with inevitability rarely seen in storms several days away from landfall," as the Washington Post ominously put it. Florence is in fact beating a path of destruction toward the Carolinas, but as AccuWeather meteorologist Evan Duffey tells Gothamist, she "will stay to the south of New York City by a good bit," moving West to strike between the Southeast and Mid-Atlantic late Thursday night or early Friday morning. 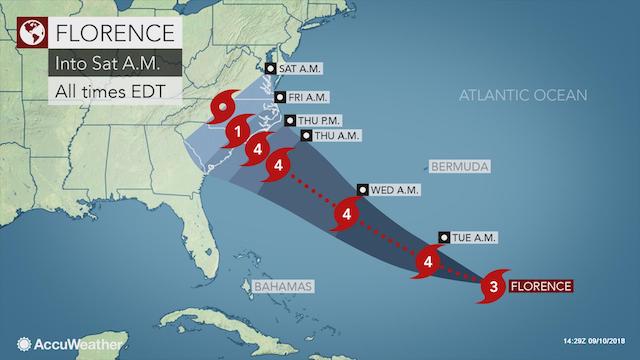 The rain projected to envelop New York City this week actually comes from a separate weather system: The moisture event formerly known as Tropical Depression Gordon. According to Duffey, Gordon constitutes the "most pressing and immediate" weather element for New Yorkers this week.

Gordon began as a tropical storm, having been downgraded to a tropical depression—which, according to Duffey, ranks "a step below a tropical storm"—as it moved from the Gulf into Mississppi last week. Through tomorrow evening, New Yorkers will marinate in Gordon's soggy leftovers. "Then we're just going to be dealing with normal summertime shower and thunderstorm activity," Duffey predicts.

In a press release, Governor Andrew Cuomo's office warned of "soaking rain" to persist through Monday evening, although so far, the city seems to have experienced little more than a constant spritzing mist and temperatures in the low 60s. Unfortunately, that bubble may burst tomorrow, when scattered thunderstorms plunge us back into the swampy 80s, with parallel humidity levels. 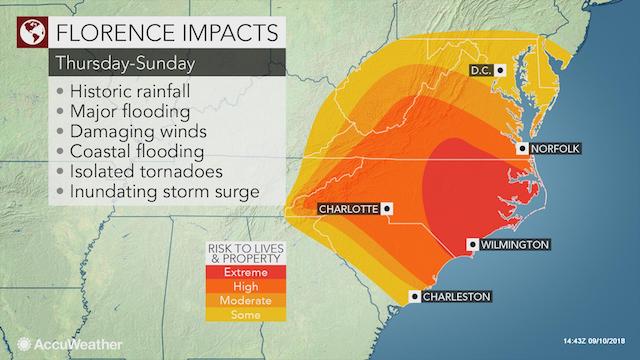 Experts expect Florence could stall out over North and South Carolina, lashing them with absolutely merciless rain. As of 11 a.m. EST, according to the National Hurricane Center, Florence was tracking toward Bermuda, roughly 1,240 miles southeast of Cape Fear, North Carolina. Florence is currently bringing winds between 115 and 185 mph. According to meteorologist Eric Holthaus, Florence could cause "catastrophic flooding" in North Carolina.

September 10, 11 AM EDT: Here are the Key Messages for #Hurricane #Florence. You can always get the latest forecast at https://t.co/tW4KeGdBFb pic.twitter.com/IJ7OG63Zrp

#florence
#hurricane
#storm
#weather
Do you know the scoop? Comment below or Send us a Tip
A new Gothamist is coming! We’ve moved comments over to our beta site. Click here to join the conversation and get a preview of our new website.