Residents of Edison, New Jersey received a brazenly racist campaign mailer on Wednesday calling for the deportation of two Asian-American candidates for school board, and promising to "Make Edison Great Again."

The mailer features the faces of candidates Jerry Shi and Falguni Patel with a red "DEPORT" stamped on their faces. It warns that "The Chinese and Indians are taking over our town! Chinese school! Indian school! Cricket fields! Enough is Enough!"

The card's backside side reads, "Stop wasting school holidays! Stop the outsiders! Let's take back our Edison!" According to NJ.com, Edison is New Jersey's most populous suburb, and nearly half of the town's 102,000 residents are Asian. In last year's presidential election, 13,262 Edison residents voted for Trump, compared to 22,178 for Clinton. 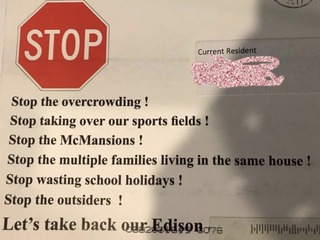 The back of the postcard (via Sam Khan)

Jerry Shi currently sits on the Edison township school board, and is running for reelection next week. Falguni Patel, a Democratic committeewoman and immigration lawyer, is on a slate with three other incumbents, according to NJ 101.5.

"I'm obviously disgusted by it, to say the least," Patel told the radio station. "I didn't expect anything like that. We live in a such diverse town, it’s very shocking somebody would put that in writing."

"I was born and raised in New Jersey," she added. "To see the word 'deport' on my picture—where are you going to deport me to? Really it’s just outrageous."

Both mayoral candidates have also denounced the mailer. "It has become a sad reality that in our polarized political atmosphere, some people suddenly feel empowered to publicly express these vile ideas," noted Mayor Tom Lankey, a Democrat. "Make no mistake, we will do everything we can to expose the shameful people behind this."

In a Facebook post on Thursday morning, Republican challenger, Keith Hahn, called the flier "shameful and disgraceful," but also suggested the mayor was in some way connected to a P.R. firm that Hahn thinks may have been hired to produce the mailers.

The ads do not identify who paid for them, and are therefore in violation of state election law. So far, no one has taken credit.

#campaign mailer
#deportation
#edison
#new jersey
#racism
#school board
Do you know the scoop? Comment below or Send us a Tip