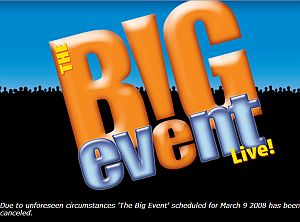 An influential group of rabbis have put the kibosh on a concert planned for next Sunday at MSG’s WaMu theater. Billed as The Big Event, the show was to be headlined by popular Hasidic pop singer Lipa Schmeltzer and raise money for an Israeli charity that finances weddings for orphans. But after an edict was issued against the event, Schmeltzer dropped out, saying, “I have to get out of the fire.”

Two Brooklyn community leaders, Asher Friedman and Rabbi Avraham Shor, mobilized opposition to the concert late last month, warning that the concert would promote “ribaldry and lightheadedness… [and] strip the youth of every shred of fear of heaven.” Some Hasidim criticize Friedman for corrupting Jewish youth with secular musical styles, others warn his popularity might eclipse the authority of the rabbis.

Schmeltzer had agreed to sing only traditional Hasidic songs; gender segregated entrances and seating had also been arranged. But this was not enough for the 33 rabbis who signed the edict, and promoters estimate their losses at $700,000. (Ticket holders had paid between $50 and $500.) Promoter Sheya Mendlowitz says "In the end it narrowed down to two people that went and obtained signatures in a very slimy and shady way, two very dangerous people."

For an illuminating peek into the controversy surrounding Lipa Schmeltzer, take a scroll through the 350-plus comments on this Yeshiva World article. Here’s commenter #91: “We have now banned sporting events, concerts, amusement parks, the circus & malls among other things. Of course I don’t argue with the p’sak on these. But what in heavens name do we want people to do realistically for recreation?”