Three weeks after being arrested in Chicago, R. Kelly was arraigned Friday morning in a federal court in New York for charges involving racketeering and sexual exploitation of children. The singer pleaded not guilty to the charges and was denied bail, which means he will remain behind bars. The judge noted the severity of the charges against him and his "significant incentive" to flee in denying bail.

The morning did not exactly go as planned for Kelly's attorney, Douglas Anton, who was briefly unable to locate Kelly while attempting to confer with his client before the arraignment. "I have spent the hours that followed his landing on the phone with the [Bureau of Prisons] at both New York MCC and Brooklyn MDC trying to locate my client, but no one would provide that information to me," Anton wrote in a letter to judges, per the Daily News. Meanwhile, some Kelly fans spent the morning lining up outside the courtroom to express support for the accused singer.

Fans of #RKelly started lining up outside federal court in Brooklyn two hours ago for his 10 a.m. arraignment and it is too early for this. pic.twitter.com/HVkQBwdyBb

Last month, Kelly was charged in separate federal indictments in both Chicago and New York. The five-count indictment from the Eastern District of New York charges him with “racketeering predicated on criminal conduct including sexual exploitation of children,” as well as kidnapping, forced labor, and various violations of the Mann Act, according to a press release. You can read the full list of charges here. (He was separately charged with federal child pornography and obstruction charges in the Northern District of Illinois.)

Ahead of the arraignment, the disgraced R&B singer was flown to New Jersey on Thursday in the custody of U.S. Marshals. In footage captured by NBC News, Kelly can be seen arriving at the airport, clad in a prison shirt and handcuffs, and being escorted into a pickup truck by several officers. It is a striking visual for anyone who is accustomed to seeing Kelly largely evade legal or career consequences for his alleged abuse for years.

Kelly, who is 52, has been the subject of extensive sexual abuse allegations and rumors dating back to the 1990s, though, until now, he had largely dodged any legal repercussions. He’s been known for his involvement with underage girls, including his 1994 marriage to Aaliyah when she was 15 years old. The singer was indicted on child pornography charges in 2002, but the alleged victim declined to testify and he was eventually acquitted of all charges. In 2017, Kelly was accused in a BuzzFeed News report of holding numerous women in an abusive sex “cult.” That story was written by Jim DeRogatis, who has spent nearly 20 years reporting on Kelly. (A resulting book, "Soulless: The Case Against R. Kelly," was published in June.) 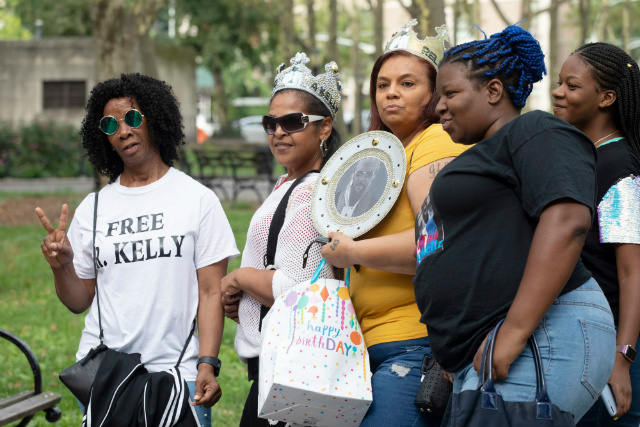 In recent months, Kelly’s alleged crimes drew renewed attention following the airing of a six-part Lifetime documentary, Surviving R. Kelly, which features interviews with women who say they experienced sexual abuse from the “Ignition” singer. As Page Six reported earlier this month, that documentary indirectly led to Kelly’s arrest; according to the newspaper’s source, a Homeland Security Investigations agent decided to investigate the singer after watching the series.

Kelly has continued to deny the abuse allegations (notably while breaking down and crying during an interview with CBS’ Gayle King). "Believe me, man! This is not me!" he claimed during that interview. "They lying on me!"

Since the documentary aired, he has been dropped by his label, RCA Records, and numerous radio stations have said that they will no longer play his music. If convicted, he could face a minimum of 15 years in prison (and even up to 30 years), according to legal experts.

#mann act
#Music
#R. Kelly
#sexual abuse
Do you know the scoop? Comment below or Send us a Tip