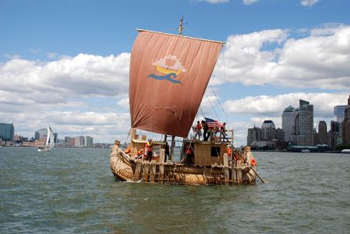 A ship built of reeds and using stone age technology is being equipped at Liberty Harbor, NJ in preparation for a transatlantic journey to Spain that will begin in a few days. In the tradition of Thor Heyerdahl, who completed a similar task by sailing a balsa wood raft from South America to Polynesia in 1947, a German botanist named Dominic Gorlitz is attempting to prove that trans-oceanic travel was possible 14,000 years ago. From NY1:

The Abora 3 itself is “old school” to say the least. Built of 12 tons of bundled reed by the Aymara-Indians in Bolivia, the Abora III was shipped to Liberty Harbor, New Jersey to be prepared by Gorlitz and his crew.

Primarily using all-natural materials and Stone Age technology, including leeboards which act as a turning mechanism, the crew put the finishing touches on the vessel and is in training for the rigorous mission ahead – impressed with the progress they've already made.

The Abora 3 is scheduled to set sail for the Old World on July 11th. The expedition's official site has some amazing pictures of the boat sailing around New York Harbor. In May, several Europeans arrived in New York Harbor upon completion of their five-month Atlantic crossing on a solar-powered catamaran called Sun21. In April, Reid Stowe and his girlfriend Soanya Ahmad sailed out of New York Harbor in an attempt to voyage on the seas for 1000 consecutive days without visiting land or any port. Whenever an epic voyage is set to begin or end, it appears that New York is a favored locale.