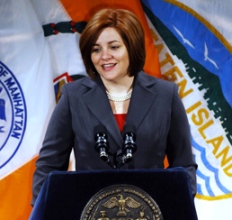 In her State of the City address, City Council Speaker Quinn said that the Council would do its own belt-tightening given expectations the economy will slow. Still, she mentioned, per the Sun, "tax cuts, improved transportation, more pay for teachers, and affordable housing," saying, "Getting leaner does not have to mean getting meaner."

Some of the proposals: suspending the city sales tax for one week; offering $300 rebate to renters; offering "bonuses of up to $10,000 to attract exceptional teachers to troubled middle schools"; and a city-subsidized year round, ferry system serving all five boroughs.

Quinn's speech was similar to Mayor Bloomberg's budget speech, where he outlined a number of cuts to city agencies, and the Sun believes the speech "could serve as a blueprint" for Quinn's likely mayoral candidacy, "perhaps positioning herself as a responsible heir o the current administration." The City Council budget is around $50-54 million, about 0.1% of the city's $58 billion budget; City Councilman James Oddo told NY1, "I heard a few groans behind me from my colleagues."

You can read Quinn's State of the City address here (PDF). And the Daily News has a bone to pick with Quinn over her speech - a consultant was paid $12,000 to write it.